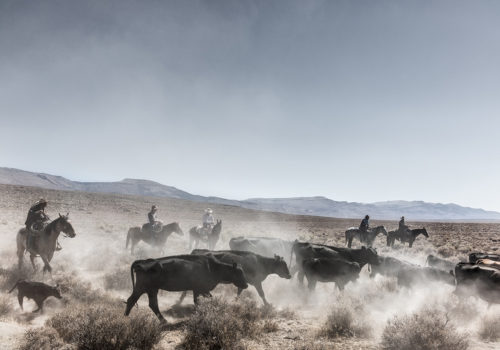 “It’s not the end of the world, but you can see it from here.” —Bruce Haley

Both volumes were shot in winter months, but this edition describes a more comprehensive seasonal arc, “from the late dry season, when the cows come in from their high desert grazing allotments, when fire danger is at its peak and there are fresh burn scars, up through the deep winter and then on into the thaw/melt period,” Bruce shares.

Taken over a period of seven years, the photographs tell not only the story of the expansive geologic vistas and playas, ice storms, and sagebrush, but also reveal the remnants of human history lingering within abandoned homes and farm equipment and broken fence lines. From Bruce’s own back pasture, he can see a long stretch of a pioneer wagon trail route.

“Geologic time smacks you in the face everywhere you look out here. Human history, on the other hand, appears shallow-rooted, tenuous and susceptible. We build our lives in harsh places and trust to fate or faith or some combination of both, while cyclical Nature dictates destiny,” Haley writes in the book’s Introduction.

He discusses the element of survival in rural America, encompassing living within the extreme elements, but also the constant hunt for financial opportunities.

“From skeletal wooden structures to rotting single-wides, equipment boneyards to shuttered businesses on dusty Main Streets, the landscape shows the scarred history of lost hopes and dead dreams. Or to cut to the chase: the remnants of another broke-ass family that was forced to move in search of work.”

His own family faced the same struggles in the 1920s, a theme conceptually shared in both volumes.

For the first time, Haley included titles on the facing pages of the images. Simple and direct descriptions of the scene or land formation, he shared that the titles helped connect him (and by extension viewers) to the place, and also served as a “nod to [painter] Andrew Wyeth” who also similarly titled his pieces, and who has served as a source of inspiration.

The county where Haley lives spans 4,200 square miles yet is home to less than 10,000 people. There is one flashing red signal light in the entire county. Because of or in spite of this, the sky and horizon lines in these photographs feel bigger, deeper in tone and resonance, than a muted city skyline. The rimrock and creek beds co-exist with ranchers rounding cattle for market or branding. In this, there is an element of trust, a fierceness connecting land, history, people, animals, hopes.

About the Artist:
Haley’s photographs have appeared in books, magazines and newspapers worldwide, as well as in corporate publications and on CD, video and DVD covers; his clients include Time, Life, U.S. News and World Report, The London Sunday Times Magazine, Stern, Paris Match, GEO, Aperture, Esquire, Georgia-Pacific and the Chevron Corporation. Numerous magazines and newspapers have profiled Haley and his work, among them American Photo, (French) PHOTO, The New Yorker, the New York Times, B&W, UTNE Reader, The Telegraph (UK), Photo District News, ARTWORKS and ARTS & LIVING. His limited-edition portfolio, entitled “13 Million Tons of Pig Iron,” was #1 on the Photo-Eye Bestseller List. In addition to publications, Haley’s exhibition prints have been shown in museums and galleries all over the world. Home Fires, Vol I: The Past marks Haley’s second book with Daylight. His first, Sunder, published by Daylight in collaboration with Charta, features photographs taken between 1994 and 2002 that reflect the complexity of land and life in the former Soviet Bloc.