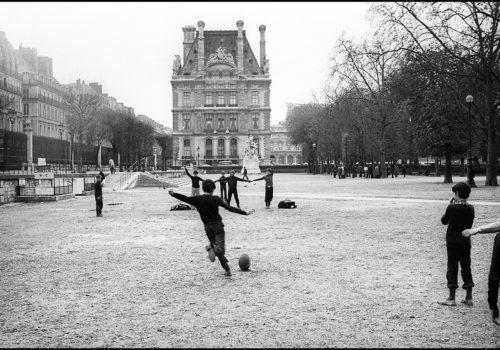 David Turnley presents at the Mairie du 3ème in Paris the exhibition Photographier l’âme de l’humanité (Photographing the Soul of Humanity). He sent us the following text :

Growing up in the industrial Midwest in the United States during the 60s, with a father who was a great athlete, and a mother who was an incredible pianist, I lived to play football. From a young age I was aware of inequality and of prejudice. I was drawn to the meritocracy of sport, and in football, the values of tenacity, and the beauty of getting into a flow, that allowed me to navigate chaos in the frame of a football field, intuitively. A certain musicality. Late in high school, my twin brother Peter, tore his knee playing football, and in the hospital, our parents gave him THE DECISIVE MOMENT, by the great French Photographer, Henri Cartier Bresson. From one day to the next both of us replaced our love for playing football, with a love for the expression and tool of photography. What inspired me in Henri Cartier Bresson’s work, is his lyrical and rhythmic sensibility for movement in space. And as importantly, the subtle but powerful statement that his work moved in me. As I experienced his voyages around the world, into the richness of a multicultural world, his photographs of every day moments in the lives of people around the world screamed an acknowledgment of our shared humanity.

From the age of 17-19, also inspired by Bruce Davidson’s book E.100th Street, Peter and I document life on a one block inner-city working class street- McClellan Street. Following my first year of college, I took my first plane trip, and armed with a portfolio of prints that Peter and I had passionately printed in our basement darkroom, I flew to New York, and took a taxi to Magnum. The Director looked at our work and with a look of astonishment, said you both have what it takes to do this. And then phoned the pillars of the documentary photography community in NY to have them look at our work. This included John Morris, who had been the original Director of Magnum, then the NY Times Picture Editor. After looking at our work, he said he wanted to champion our work. When I later shared that I was interested in moving to France, to meet Henri Cartier Bresson, he shared with me Henri’s address on La Rue de Rivoli in front of the Jardin des Tuileries, and suggested that I go to seem him, and to ask first for his wife Martine Franck who he said was also a great photographer and perhaps more readily available to meet with me. I interrupted my University studies, and flew to Paris, with money I had earned working construction during the summers of high school and my first year of college. I found a maid’s room, on the top floor of the building directly next to Notre Dame, began to study intensive French at the Sorbonne, sold ice cream in front of a café below to earn money, and walked the streets of Paris with my camera. Two weeks after my arrival in France, I went to the address John Morris had given me for Henri Cartier Bresson, and walked up the six flights of stairs to the door of his and Martine Franck’s apartment and knocked on the door. An older gentleman came to the door. I introduced myself not realizing that I was standing in front of Henri Cartier Bresson, and said I would like to please meet Martine Franck to show her our work from McClellan Street. The gentleman, responded in French, That he was sorry, but that I must understand, that “We” are very very busy. When he said “We”, I realized that I was standing in front of Henri, and in the astonishment of my realization, I laughed, not at him, but at my surprise, and said, “Are you Henri Cartier Bresson?”. And he said, “Yes, I am. Please come in but I am sorry that we are so busy.” As I entered, I was overwhelmed, seeing hanging on the walls paintings by the likes of Picasso, Matisse, Chagall, Miro. Henri then asked, “ Would you like to take some air on our balcony while you wait for Martine?” And I responded, “ Monsieur Cartier Bresson, I am from Indiana, and I have never taken air on anyone’s balcony and I would be delighted.” And with that I stepped onto the balcony to witness the absolute splendor of a view overlooking the Tuileries Gardens and the heart of Paris. This will be a moment I will never forget. And I noticed on a small dining room table Henri’s legendary Leica that I had read about that he had taped up to look more like an amateur camera so that he wouldn’t draw attention to himself. And then Martine came in.

She could not have been nicer. She looked at our work from McClellan Street and exclaimed how good it was. She then shared a book of her own work with me that I was also very moved by. She offered to introduce me to the documentary photography community in Paris at a photo lab opening in the coming days. And as I got up to thank her and Henri, who had been writing a letter at a table in the same room, he said that he would leave together with me. And with that we walked down the stairs, Henri with his Leica over his shoulder, and when we got to the arch covered side walk below, he turned and smiled, extending his hand to me, and said au revoir. I still cry when I remember the moment. I watched him walk down the side walk until he disappeared, imagining what he might photograph on his walk.

And then with an incredibly excited, grateful, full heart, walked across the street, into the Tuileries Gardens, and was determined to make a photograph, that I would always remember this incredible moment with. And I share this photograph, of children playing rugby in the parc, in honor of this moment with Henri Cartier Bresson, and Martine Franck that I will never forget. A moment, and a year of my life in France, that changed my life forever, and the beginning of a life long love affair with photography, and with Paris, and with France.

It is with this story that I am proud to share with you, a selection of my photographs, that I have made over these last five decades in Paris, that I have been invited, by the Mayor of the Center of Paris, Ariel Weil, to hang surrounding the Mairie of the 3ème Arrondissement in Paris. The show is titled Photographier l’âme de l’humanité-Paris. David Turnley, 1975-present.

Sixteen years after my first meeting with Henri Cartier Bresson, years photographing the Struggle Against Apartheid, the liberation of Nelson Mandela, a Pulitzer Prize for my work covering the end of the Cold War, the Student Movement in Tiananmen Square in China, and just having returned from making a photograph in 1991, during the war in Iraq that was awarded the “The Picture of the Year” in the World Press Photo Competition, I was invited with my wife to a reception, following a retrospective exhibition of Henri Cartier Bresson in Paris, where I was based to cover the world over many years. Seated at a table, I decided at a moment during the dinner reception, that I wanted to go to Henri’s table, who I hadn’t seen in person again for all of those years, to tell him how much he and his life work had meant to me and to my life and work. When I arrived at his table, it was one of these terribly awkward moments, where someone else had just arrived to speak with him, and I stood waiting my turn, for what seemed like an eternity. And then suddenly, Henri turned, and I shared as sincerely as I could, the sentiments that I had wanted to express. And as I sat back down with my wife and my table, about 15 minutes later, suddenly, Henri arrived in front of our table standing with a glass of wine in his hand. And as he looked at me, he so sincerely said “David. I am so moved that you came over to speak with me! I have so much respect for you and I would like you to please drink from my glass of wine!” And I smiled with so much appreciation, and said, “Henri, I can not thank you enough.” And Henri continued. “ I would like you and your wife to please come to our apartment soon, and to have dinner with us!”

I share this story along with the photographs from my current exhibit in Paris, with so much gratitude to Henri Cartier Bresson. And to the values of Liberté, Egalité, and Fraternité, of France, where I live with my wife Rachel, and daughter Dawson. Where my son Charlie was born. And where my brother Peter Turnley lives with French Nationality. There is not a day that I wake up in France, that I am not grateful. Merci de tout mon coeur!