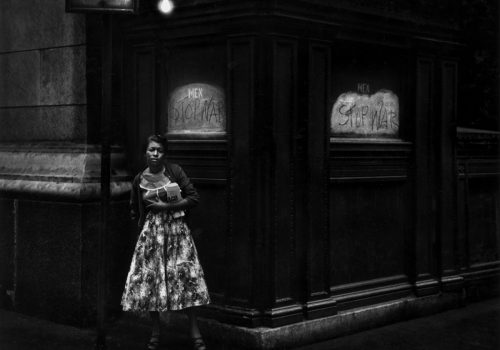 The American photographer has made a specialty of capturing the soul of a crowd and showing all the individual variations. In Paris, the BAL gives him the respect he did not have during his lifetime.

The young woman looks down, a cigarette in her hand, a cup of coffee next to her. She seems to be in deep thought, as if penetrated by an intense thought that has to do with life, death and what we do here in this world, where we sometimes lose ourselves in endless dreams.

So are the portraits of Dave Heath who manages to capture the flame of a thought on the face of an anonymous. “Figures in which I recognized myself,” says the photographer who collected these shots in a book called Dialogue With Solitude presented at the beginning of the exhibition. He says he is influenced by the Passante de Baudelaire: “a flash … then the night! “. “Fugitive beauty”.

The lightning is that moment captured by the photographer in the streets of American cities where he meets everyone and makes striking portraits. Dave Heath has a gift for catching what’s behind the mask of a face: deep thought, the weight of a consciousness. He did it in the early 1950s when, sent by the army to Korea as a machine gunner, he captures the figures of his fellow soldiers and brings out all the intense reflection they could nourish. Returning to the United States, the photographer will continue to study the faces he rubs with while walking in the cities of his country.

Abandoned by his parents at the age of four, Dave Heath had a rather unhappy childhood, tossed between foster families and orphanages. At fifteen, discovering an article in Life, he recognized himself and wants to become a photographer. Later, when he returns from Korea and starts the heart of his work, he encounters difficulties in making himself known. Around him gravitated photographers like Robert Frank or Lee Friedlander who were his friends, but who had greater success . Dave Heath, however, did not deviate from what he undertook from the beginning: to grasp the complexity of a human face where the dark work of a thought can be read.

“It filled the frame of an absence,” says Diane Dufour, curator of the exhibition and director of the BAL, “he is the filter of an era too. A time when the good American conscience is wavering at the time of the Vietnam War and the fight for civil rights of black Americans. And to add: “Dave Heath infuses all this thru his photographs. He realized it and showed it. ” Precursor, little known, he will one day stop photography to devote himself to more profitable work. But it has helped to give birth to a way of doing photography, between that of an author and that of a documentary practice, between the desire to reveal the common and that to sublimate with a dark envelope the atmosphere. The BAL pays a fine tribute to someone who deserves a place of choice in the pantheon of photographers.

6, Impasse of the Defense