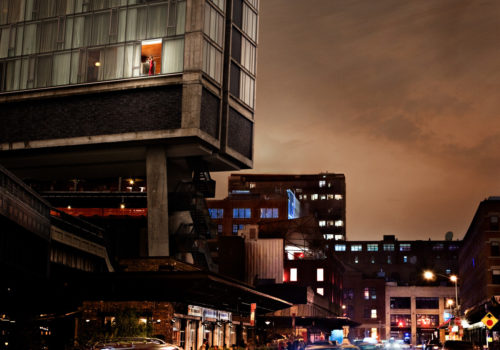 David Drebin embodies the triumph of fashion photography as an art form unto itself. His photographs are imbued with narrative – the ability to tell a story in a single photograph – a concept first articulated by photojournalist Margaret Bourke White and then applied to fashion photography by Helmut Newton.

The publication of Newton’s White Women in 1976 changed the rotation of the photographic earth. Copies were stacked up next to the cash registers at Barnes & Noble. Prosperous young financiers bought five copies at a time as Christmas presents for their just-out-of-business-school friends. The 50,000 copy first printing sold out.

Clearly, Newton had hit a nerve. Gone was the blond in a bikini posing at a construction site. Gone was the high-priced model standing inside a Fortuny dress on board a gondola cruising the Grand Canal with a freshly scrubbed gondolier at the helm. Newton’s White Women was a fantasy that, along with the narratives he created, embodied the emotional grit of real life.

Ute Hartjen, the Director of Camera Work Gallery in Berlin, first saw David Drebin’s work by chance in a group show alongside Mona Khun at Fahey/Klein Gallery in Los Angeles in March 2005. Seven months later his first one-person exhibition, featuring early works from his Femmes Fatales series, was on the wall at Camera Work.

David Drebin and Camera Work were a perfect fit. No photographer is as concerned with narrative and there is no better place in the world to show it.

Ute Hartjen followed the exhibition with a presentation of his work to publisher Hendrik teNeues which has led to seven David Drebin monographs.

David Drebin was born in 1970, grew up in Toronto, and is a graduate of the Parsons School of Design in New York. He began his career as an advertising and fashion photographer and then made the shift into the world of contemporary art. He is renowned as a cinematic storyteller utilizing a unique combination of glamour, intimacy, and intrigue, all set against the backdrop of around the world, first class private real estate.

Looking back Ute Hartjen says that the landmark 2005 David Drebin exhibition at Camera Work, “marked the beginning of our collaboration and friendship which continues to this day. David’s intention is to liberate us from the rules of everyday life and to allow us to participate in the hopes and dreams of his models. He has succeeded beyond anyone’s imagination.”

David Drebin recalls, “Camera Work gave me my first chance to exhibit my artworks and I met the most incredible people at the gallery. They provided the support so crucial to artists in the beginning stages of their careers and helped set up exhibitions all over Europe. After almost two decades of working together, still loving Camera Work and our fantastic relationship, like a beautiful marriage!”