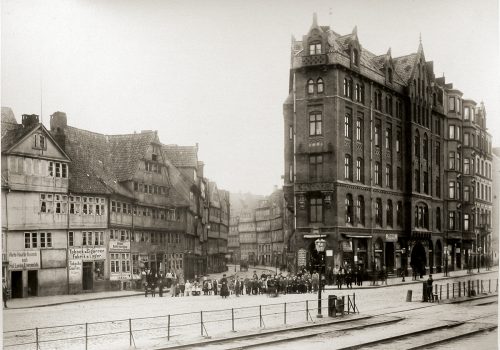 Daniel Blau present an exhibition of vintage photographs showing historic sites of Hamburg in 1883/84. These photographs were taken shortly before the demolition of the sites ahead of the construction of the Speicherstadt(warehouse city on the Elbe).

Nineteenth-century German photography is represented only by a small number of photographers, who appeared to have worked mainly in Italy. They were fascinated by the great wealth of the Italian architecture and by the antiquities found nearly everywhere in the country. This makes Georg Koppmann’s photographs that much more noteworthy, documenting as they do not only a Hamburg which no longer exists, but a moment in the history of photography, artifacts and historical studies in and of themselves. These photographs are a valuable source of knowledge for a great city’s architecture, both as documentation and representation.

From the very beginning, photographers have explored architecture as a primary subject. One of the first surviving photographs takes an architectural theme, a view captured by Joseph-Nicéphore Niépce in 1827, across the rooftops of his property. When the printing process was further improved following the collaboration between Niépce and Daguerre, albums could be published, bearing photographs of the world’s great monuments in Egypt, Nubia, Palestine and Syria, in Greece, Spain, Italy and France. William Henry Fox Talbot’s earliest surviving photograph has an architectural subject, too.

Drawings offer a useful source of information about architecture, allowing us to peer over an architect’s shoulder, and, thus, making it possible to trace the design and development of a building. Photographs, however, provide an immediacy and accuracy of representation.

Talbot – considered the inventor of the negative process – wrote in 1845 that “even accomplished artists now avail themselves of an invention which delineates in a few moments the almost endless details… which a whole day would hardly suffice to draw correctly in tahe ordinary manner.”

Photographers also were commissioned by municipal and private agencies to document old buildings on the cusp of demolition, in urbanization and modernization’s path. The systematic documentation of Paris by Charles Marville shows whole streets and neighbourhoods being destroyed as entirely new areas of the city are developed in their place. Georg Koppmann’s photographs show historic streets, buildings, canals and bridges of Hamburg just before they were torn down for the imminent construction of the city’s famed warehouse district – the Speicherstadt.

In addition owning a photography business in Hamburg, Georg Koppmann made a name for himself through his work as a photographer in his own right, and especially for the photographs he made of architecture and cityscapes throughout Germany. On behalf of the Hamburgische Baudeputation (Hamburg Building Deputation), he photographically documented the streets and buildings that would have to be cleared for the construction of Speicherstadt from 1883. This work was published in the portfolios “Hamburg 1883 ‘Ansichten aus dem niederzulegenden Stadttheil’,” with 35 albumen prints, and “Hamburg 1884 ‘Ansichten aus dem niederzulegenden Stadttheil’,”, consisting of 36 albumen prints.

Speicherstadt (“Warehouse District”) is the world’s largest complex of warehouses, with an area of 260,000 square metres. It was built into the Elbe River between 1883 and the late 1920s, on thousands of oak poles, as a free economic zone in Hamburg’s port. In 2015, Speicherstadt, Kontorhausviertel and Chilehaus became Germany’s 40th UNESCO World Heritage Site.

The Free and Hanseatic City of Hamburg became part of the German Empire in 1871, but for a time it was able to maintain its own tax and customs regulations. This privilege remained in place until 1881, when a new customs union was installed. From this point on, only the free port area along the Elbe River remained exempt from import sales taxes and customs. Final annexation of Hamburg by the German Empire was scheduled for 1888, allowing the city seven years to create new storage facilities inside the free port area. In order for construction of the warehouses to begin, which it did in 1883, around 24,000 people had to be evicted, and around 1,100 houses torn down.

In 1888, Emperor Wilhelm II inaugurated Speicherstadt, although only the first building phase had been completed. Interrupted by World War I, construction lasted all the way until 1927. During World War II, Operation Gomorrha destroyed the western part of the district.

Reconstructions lasted until 1967. Finally, on January 1, 2013, an era came to a close, and the free economic zone of Speicherstadt, covering almost a fifth of the area of Hamburg’s entire port, was dissolved.