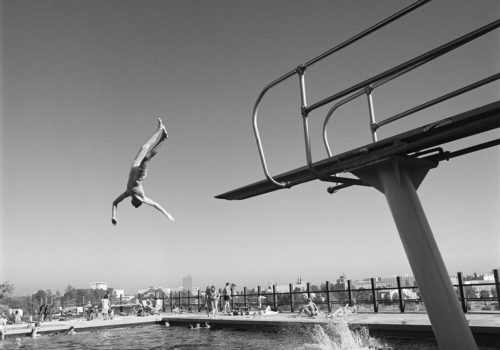 This new book published by Damiani is trove of unseen and uncommon Ansel Adams photographs, assembled by Mike Mandel from archival collections and with a text by Erin O’Toole.

“Zone Eleven” alludes to Ansel Adams’ Zone System, a method for controlling exposure of the negative in order to obtain a full range of tonality in the photographic print—from the deepest black of Zone 0 to the brightest highlight in Zone 10. “Zone Eleven” is a metaphor coined by artist Mike Mandel in his challenge to create a book of Adams’ photographs outside of the bounds of his personal work. Many of these photographs were found in the archives of Adams’ commercial and editorial assignments, and from his experimentation with the new Polaroid material of the times.

For this book, Mandel has unearthed images that are unexpected for Adams, and created a new context of facing-page relationships and sequence. Zone Eleven is the product of Mandel’s research into over 50,000 Adams images located within four different archives, from which he presents a body of Adams’ work that was largely unknown until now.

Mike Mandel is well known for his collaboration with Larry Sultan from the 1970s to the 1990s. They published Evidence in 1977, a collection of 59 photographs chosen from more than two million images that the artists viewed at the archives of government agencies and tech-oriented corporations. Conceptually, Zone Eleven is a companion book to Evidence. As Evidence reframes the institutional documentary photograph with new context and meaning, Zone Eleven responds to the audience expectation of “the iconic Ansel Adams nature photograph.” But Mandel selects images that do not fit that expectation. Zone Eleven is a book of Ansel Adams images that surprisingly speak to issues of social relations, the built environment and alienation.

Given his long interest in popular forms of photography, it is not surprising that Mandel chose Adams’s commercial work as his subject. These are essentially vernacular pictures that happened to be made by Ansel Adams—totally unlike Adams’s best-known photographs, which Mandel terms “unitary,” meaning singular pictures that don’t depend on what comes before and after. The pictures in “Zone Eleven” are more open, less self-contained. Mandel has seen something special in each of them that others might overlook and transformed them through canny selection and juxtaposition.   —Erin O’Toole

Erin O’Toole is an associate curator of photography at SFMOMA.