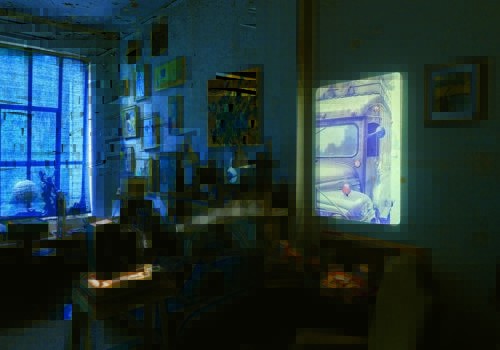 The book The Unseen Saul Leiter published by D.A.P. is a thrilling trove of newly discovered color works from the photographer celebrated for his pioneering painterly vision.

Now firmly established as one of the world’s greatest photographers, Saul Leiter (1923–2013) was relatively little known until the 2006 publication of Saul Leiter: Early Color, when he was already in his eighties. Choosing to shoot in color when black and white was the norm, Leiter portrayed midcentury New York’s street life with a gorgeous painterliness that evoked the sensuality of his Abstract Expressionist contemporaries Rothko and Newman. His studio in the East Village, where he lived from 1952 until his death in 2013, is now the home of the Saul Leiter Foundation, which has commenced a full-scale survey of his more than 80,000 works.

This volume contains works discovered through this project—specifically, color photography from slides never before published or seen by the public. It is edited by Margit Erb and Michael Parillo of the Saul Leiter Foundation, and is embellished with texts that describe how Leiter assembled his slide archive and how it is being catalogued and restored.

Saul Leiter was born in Pittsburgh in 1923. He pioneered a painterly approach to color photography in the 1940s and produced covers for fashion magazines such as Vogue and Harper’s Bazaar, before largely withdrawing from public attention in the 1980s. The publication of his first collection, Early Color, by Steidl in 2006, inspired an avid “rediscovery” that led to worldwide exhibitions and the release of a documentary, In No Great Hurry: 13 Lessons in Life with Saul Leiter (2014). He died in New York in 2013.

“When we look at Leiter’s photographs now, we can feel an intriguingly pleasant disparity. On one side are the old cars and midcentury fashions, and the often faded colors that clearly signal a bygone era; on the other, a timeless, maybe even futuristic, vision for seeing the world as only Saul Leiter could.” —Michael Parillo