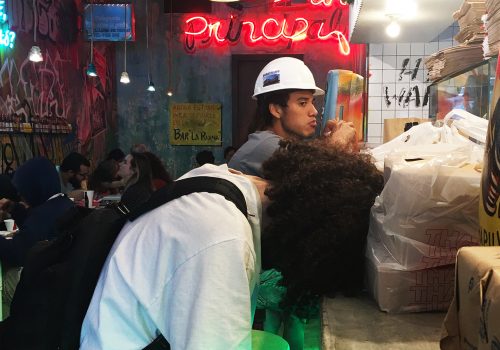 It was the final day of Miami Art Week, and I needed to reenergize. I felt like this image of the guy waiting for tacos at the Taco Stand in Wynwood and also like this image of the guy passed out in his van as I was walking to the Taco Stand. In fact, it felt like many people in Miami were ready to pass out from this final day. I needed to jumpstart my pulse… so I went to Pulse!  Image 92, 93, 94, 95

It was Allison Janae Hamilton’s Sweet milk in the badlands, 2018 that first woke me up. The feathered pieces integrated with her photographs worked well with the installation. And the caption for it explained it so clearly.

“Sweet milk in the badlands looks toward, ritual, storytelling, and trance in search of the connections between landscape as integral to the understanding of both history and the present…The collection of works considers the ways that land operates as a protagonist and considers each apparition that inhabits its terrain as a bridge between today’s lived realities and the long history of the rural American landscape. The series was developed in North Florida and in Western Tennessee where the artist’s family lives.” Image 96, 97, 98

Next to her work was another group of attractive photographs at Danziger Gallery.

There was Rizako Suzuki’s Sakura(cherry blossoms). His pieces reflect the presence and passage of time. I like how he plays with focal point and depth of field to bring the viewer into a dreamy, infinite landscape of blossoms. He’s done 3 volumes of sakura,and the gallery will be focusing on another show with him this spring. Image 99

Seydou Keïta was another great photographer that caught my attention. Having come from Mali, he covered Bamako society during the transition from a French colony to an independent city. He usually shot under natural daylight to capture stoic portraits of people with backdrops and clothing that had beautiful patterns. In the 1990’s this self-taught photographer’s archive of over 10,000 negatives was gradually shared to the public and continues to be shared today after his passing in 2001. Image 100

Then, I went to Accola Griefen Fine Art and learned more about Gina Adam’s work from Kat Grieffen.

Kat:Here is Gina Adam’sGirls Native American Basketball Team 2.1, 2017 which incorporates a photograph of the women’s Osage Boarding School. It’s an assimilation school that was set up by the US government. And the photograph here shows the women’s basketball team at that school around 1940.

Gina does deep research for all of her work. On one side, she is colonial American,and she also has Anishinaabeand Lakota heritage. Through a fellowship at the Smithsonian, she researched information about her family. This included looking at assimilation schools because four generations of men in her family had been in the Carlisle Indian School, another assimilation school.

These girls in the photo were segregated from the white community but came together when they played on the court. With this piece, Gina also talks about how basketball played a vital role in the Native American community. And in many ways it continues to do so. A lot of the best coaches and players in the early years of basketball came out of the Carlisleschool and other assimilation schools. Image 105

Further down, I ran into Aristotle Roufanis’ highly detailed and large scale images of Alone Togetherat Momentum Fine Art. Walking into his space, I was enveloped by cityscapes where select lit rooms peered out of the darkness. These images were composites of up to 1,000 images taken over the course of the night. And the final image can take up to 5 months to produce. Aristotle was exploring the phenomenon of social isolation in mega cities, as this is something he underwent when he moved from Athens to London. His research determined that many cities are built with efficiency and growth in mind but not built to facilitate social interactivity. Image 106, 107

The day ended being lured to Irene Grau’s work represented at Maus Contemporary. Born in Valencia in 1986 and currently living in Santiago de Compostela, her “methodology focuses on color as a transforming agent of space, and its perception.”  Her work, Ningun lugar en particular(Nowhere in particular) is a series of photos she took traveling to various cities including Madrid, New York, and Kassel. During an 18 month period, whenever she stayed in a location for at least one night, she replaced a hanging piece of “art” (usually a scene of a landscape) with a white monochromatic painting she brought in her suitcase. By doing this, she made the space her own and preserved this moment by taking a photograph of it in its new location. With this work, she also touched on voluntary and involuntary displacement where you can only take with you what fits in your suitcase. Image 108

After processing everything, especially from the photographic angle, this Miami Art Week had less distracting “spectacle” pieces. There were beautiful images with a focus on color, composition and technicality. But there were also many thought-provoking works on identity and social discourse which reflected the continued changes of our times. I leave the fair being reminded of the benefits that come from exhibiting diverse works from varied voices. It only better informs and brings more clarity to the viewer about topics they may not fully be aware of. And some works thankfully encouraged introspection towards our own historical and contemporary context.