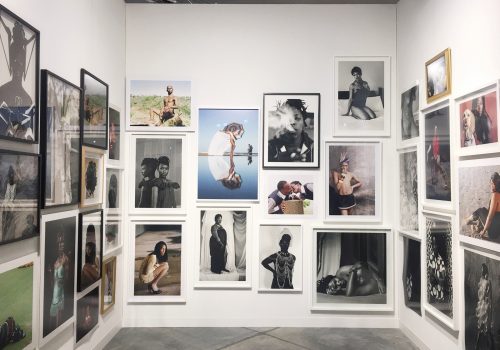 Rise and Shine! I woke up early to attend the press conference and vernissage at the Miami Convention Center. With notes in hand, I soon realized I was being shadowed by Cathy Byrd from Fresh Art International, a Miami based podcast that covers contemporary art. We soon bumped into Esther Park and Chris Heineman from Art Center South Florida, an institution that has supported South Florida artists for the past 30 years. Esther kindly captured my surprise with being shadowed by Cathy in front of Sam Durant’s “We Are the Ones We’ve Been Waiting For”. Image 6

And off we went to see Nancy Burson’s impacting work at Paci Contemporary. She has explored image manipulation through portraiture since the early 1980’s. What makes her work different from those images manipulated by Lazlo Moholy-Nagy and Wanda Wulz before her is that she created composite portraits in the digital age through computer algorithms that stretched faces without dividing them into sections. She shared a pioneering patent “The Method and Apparatus for Producing an Image of a Person’s Face at a Different Age” which became the basis for morphing technologies still used today. I couldn’t help but think about my Beauty series (2011-ongoing) which explores the digital manipulation of identity and shaping of “beauty”. Perhaps I was channeling a bit of the brilliant Nancy Burson without even knowing it. Image 7, 8

I was eager to experience Lorna Simpson’s piece and also wanted to learn more about photographic artist, Deanna Lawson. Jared Quinton, the Associate Director of Rhona Hoffman Gallery talked to us about their work.

Jared:Lorna Simpson is an important early conceptual photographer who emerged in the 80’s when a lot of artists were thinking about identity in a new way. She invented this form of conceptual photography, breaking down stereotypes about the body and mixing imagery and language to think about the different ways identity could be expressed where a photo just wasn’t a photo. In this work, (“Shoe Lover 3” 1992), she’s doing some word play with “female attraction” and “attract females”. She isolated some high heels and a shoebox. And there’s a woman in a man’s blazer, but you don’t see her head. She’s refusing to be photographed and turning away. Lorna is thinking about stereotypes and also how to resist them.

It’s really interesting to pair an artist like Lorna with a very contemporary artist like Deana Lawson. She’s a next generation African American artist but clearly working in the legacy of Lorna as far as thinking about African American culture and identity through photography. Deana is a charismatic, charming, warm person. And so much of that is shown in her photographs. Every portrait that she shoots develops from a grain of social interaction. She doesn’t photograph paid models or people she knows but people she meets on the streets or in her travels. And through getting to know them, she orchestrates these intimate scenes. But as intimate as they feel there’s always something a little bit mysterious about them where you don’t quite know what’s going on. Every detail is very considered. Image 9, 10

Soon after, I entered Zanele Muholi’s stunning Kabinett presentation at Stevenson Gallery. It’s a collection of Muholi’s body of work spanning around 15 years of the artist’s practice. Muholi is a South African photographer who is best known for the ongoing self-portrait series, “Somnyama Ngonyama (Hail the Dark Lioness)”. Muholi’s earlier “Being” series looks at queer identity and the presence of the black queer body as a kind of document in history. Muholi’s visual activism felt attacked when a burglary occurred where there were lost archives including an extensive amount of material covering hate crimes in South Africa. In response to this, Muholi created “Mo(u)rning” 2012. Muholi’s recent series “Of Love & Loss” (2013-Ongoing) documents LGBTQI weddings and funerals, capturing the joy and sadness of a community still affected by hate crimes. Image 11, 12

The next stop was at Howard Greenberg’s gallery, a gallery that has spent over 30 years building a collection of some of the most important photographs in history. Although there was a variety of photographic works in his gallery, Howard was the first to consistently exhibit photojournalism and ‘street’ photography, a component to photographic art. Here, I was enveloped by photographs from familiar talents which included Bruce Davidson, Edward Burtynsky, Man Ray and Imogen Cunningham. There were also pieces I have never seen before like Alan Kleinberg’s collage narrative, Roy Metzer’s arresting, high-contrast series and Sarah Moon’s ethereal, female portraits. Image 13, 14, 15, 16, 17, 18, 19

More familiar photographers were also found at Spruth Magers with Cindy Sherman and Bernd and Hilla Becher. There was also Irving Penn at Pace/McGill. Seeing Irving Penn’s carefully crafted portrait of Kate Moss shot in 1996 reminded me of my experiences being in his studio when Vogue magazine shot David Bowie’s portrait and also the perfect turducken still life in 1999. It was fascinating to witness the level of detail and care that he and his team ensured to produce such resonating work. Those very early experiences being in his studio were instrumental in fueling my interest to learn more about portrait making and photography. Other well-known photographers at Art Basel Miami included Robert Mapplethorpe at Mai 36 Gallery and Hiroshi Sugimoto at Marian Goodman Gallery. Image 20, 21, 22, 23, 24

Wolfgang Tillmans’ Silver 186, 2014 was boldly present at Galerie Buchholz, a gallery that has worked with him for over 25 years. “Wolfgang’s broad approach to photography has captured fragments around the world where he uses his pictures from past and present and recompiles them into these strikingly beautiful installations. There’s this constant dialogue that keeps his body of work in motion.” This color work is his exploration of the medium itself and demands attention. Image 27

Then, I walked into Ferguss McCaffrey and discovered Ishuichi Miyako’s compelling work which deals with the passage of time. On display were photographs from Appearances Can Be Deceiving: The Dresses of Frida Kahlo.Diego Rivera, Frida’s husband, dictated that none of Frida’s possessions could be touched until 15 years after his death. And in 2013, Miyako was commissioned by the Frida Kahlo Museum to photograph Frida’s possessions. Earlier in 2008, she also was commissioned to photograph possessions that survived the atomic bomb in Hiroshima. There was something so intimate and moving about the objects she carefully staged in these photographs. Image 28, 29, 30

It was time to head home and process all of these experiences. A gorgeous sunset waved the day goodbye. Image 31