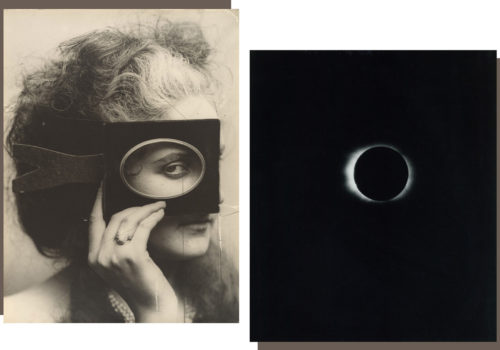 “Here we have a comparison between the Countess of Castiglione, portrayed by Pierre-Louis Pierson, and a solar eclipse in the image of an anonymous photographer. I invite you to discover the story that binds these two gazes, separated by over a century, yet so close. And I invite you to stay in touch and follow the next appointments.

Of that black pupil she had made the center of her solar system. She was the star, she was the light, she was blinding. The earth and its inhabitants had no other choice but to follow the laws of astronomy and orbit around her, following the ellipse of the oval frame that isolated that fiery eye. When the Countess of Castiglione asked Pierre-Louis Pierson to portray her in the famous Scherzo di follia, it was already a memory, life at the court of Paris, the passion of Napoleon III, the dances, the dress of a “queen of hearts”; one of the embroidered hearts had gone beyond the very thin waist, where the emperor loved his Italian mistress. But despite the defeats of history one cannot be exiled from oneself and the Countess, the first eccentric, the first narcissist of the photographic era, who was the first interpreter of the infinite parts of the female imagination through photography – empress, widow, prostitute, murderess, nun, madonna, dying – continued to direct Pierson so that his lens kept the beauty and extravagance intact. Her own darkness caught her when she wasn’t forty yet, when in her apartment in Place Vendôme she did what the moon does to the earth for a few minutes, remove the sunlight. The Countess closed the windows, drew the curtains, veiled the mirrors with black drapes, and went out only at night. The eye that did not want to look at itself became an eternal eclipse and she stopped, at her whim, the peaceful course of the solar system.”