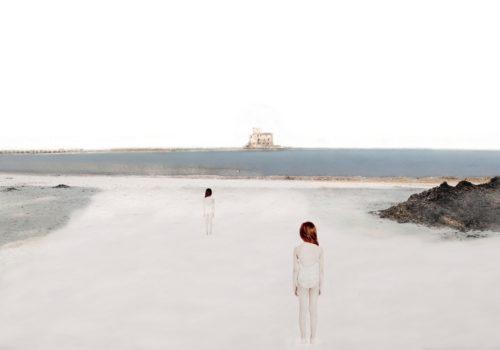 Her name: Tina Cosmai. She has just released a book with Contrasto editions entitled: Via di Fuga a Mare. The curator and art critic Gigliola Foschi presents it as follows:

Images like figures of distance, of silence, of speaking in a low voice, almost in allusion. Photographs of the same place that change from image to image, as if they wanted to guide us on a motionless journey to an elsewhere of thought that takes us into our relationship with nature and time, with ourselves and with our loneliness. The sea is always in front of us, in our field of vision: infinite, limitless and yet now inaccessible, like a presence-absence. Inaccessible because it no longer indicates any departure towards an elsewhere, any possibility of identification. It does not make us tremble before the unlimited, but communicates an almost archaic affection that combines with a subtle feeling of non-participation, of alienation. This is why we now see it veiled, immersed in a glow that confuses sky and horizon.

Via di Fuga a Mare is the emblematic title of the series of works, divided into five “little chapters”, presented by Tina Cosmai. But Via di Fuga a Mare is also the inscription on a panel corroded by salt and human neglect, overlooking an almost invisible sea in the distance. It is a kind of oxymoronic image announcing what is prevented: an escape to something that hardly exists anymore, to a sea that has become “an improbable seaside landscape hybridized with industrial settlements” (as written by the author). A sea towards which men, despite everything, continue to turn their gaze, as if attracted by an unconscious and unfulfilled desire for infinity. In her images, the sky closed in a timeless whiteness and the horizon obliterated by the industrial docks, which seem to want to take the place of the marine shades of blue and sky blue, create a subtly anguished atmosphere, a feeling of loneliness, an absence of hope. Emotions that the author tempers with a poetic touch, as if they came from the magic wand of a fairy sensitive to the suffering of the world and of human beings, and therefore determined to relieve it. Tina Cosmai’s works, like her sea, are in fact limitless images, intimate images where lightness is combined with melancholy, reality with reverie. These works are in fact born from an “inner conversation” with the landscape, because they are based on a long familiarity, on a silent dialogue capable of bringing out what remains hidden and stimulating fantasies and emotions.