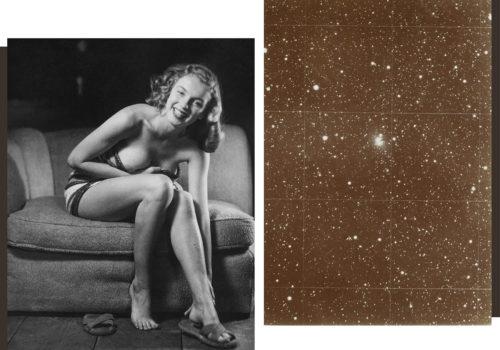 This is the twentieth dialogue in the Ettore Molinario Collection. It is a tribute to the light of the stars, a light to which photography, Promethean by nature, has felt attracted since its origins, as the vault of heaven by John Franklin-Adams reminds us. Next to it, lighting up the sky of our desire, is another star, Marilyn Monroe, still named Norma Jean in Earl Moran’s portrait. Beautiful lights to start 2023 together.
Ettore Molinario

If they had met as children, and it doesn’t matter if they belonged to different eras, and if they had spent a night together, those nights by the window, nights still observed with the naked eye, John and Norma would have talked about the stars. They both dreamed of them and they both wanted to be part of that immense expanse of lights, each in their own way. John was John Franklin-Adams, astronomer and photographer, member of the Royal Astronomical Society since 1897. Norma was Norma Jean Baker, who at twenty was still Norma Jean Dougherty, her first husband’s surname, and was about to become Marilyn Monroe.

John Franklin-Adams, English and polyglot in a nebula of languages from Spain to Italy and from Russia to Scandinavia, had begun to study the stars in his forties. His heroes were John William Draper, who had photographed the moon in 1840, Jean Bernard Foucault who had portrayed the sun for the first time in 1845, Julius Berkowski, his first solar eclipse observed in 1851, and finally Paul Pierre and Prosper Mathieu Henry who in 1886 had looked up to Jupiter and Saturn. But John Franklin-Adams wanted more. An insurer of the Lloyd company, he wanted to secure eternal glory, and in two long photographic expeditions in the southern hemisphere, in Cape Town, and in the northern hemisphere, in the observatory built in his home of Argyllshire, had produced the first photographic sky atlas. Two hundred and six plates, each divided into the squares engraved on the same objective. Easier, even more feasible, to count the stars on each celestial tile, and it is the enterprise to which Franklin-Adams would devote the rest of his life.

Norma Jean had also begun to look at the stars through a square, that of the window of her room in her Los Angeles orphanage. Beyond the shutters the luminous sign of RKO Radio Pictures shone. But back then, when Norma was eight years old, the name of that major that boasted stars like Katharine Hepburn, Fred Astaire, Ginger Rogers, Cary Grant and Bette Davis, reminded her only of the smell of the glue on her mother’s fingers, employed in the editing department by RKO itself. Another eight years had to pass, and by then she was already a child bride, for Norma Jean to understand that the silver screen was her vault of heaven and that the luminous bodies of Ingrid Bergman, Joan Crawford, Gene Tierney and Jennifer Jones, her adored divas, formed a constellation of which one day surely she would be part.

The famous pin-up portraitist Earl Moran was one of the first to guess that that girl with lips born to smile with innocence and pleasure would become a movie star. A matter of photogenicity and of reaction to the stellar dust of the spotlights. Moran had selected Norma from the Blue Book Modeling Agency catalog and for four years, during which photographer and model would become friends, he portrayed her in his studio paying her $10 an hour. The couch Norma lay on was probably staved in, the towel she covered herself with wasn’t the scarlet dress that would wrap her body one day, and man’s slippers were a universe away from the stiletto heels that punctuated her stupendous stride. Yet a star, more incandescent than a Supernova, was being born. Scientists say the first stars were born thirteen billion years ago from a cloud of hydrogen and helium. Eternally in love with Marilyn, we all know that of all the stars she has been the last.
Ettore Molinario