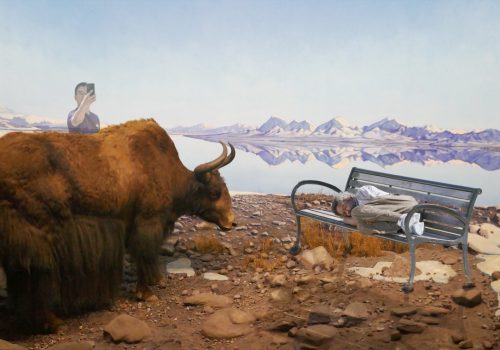 Wild Kingdom (2014-Present) is a series of photographs referring to how social media creates a form of social distancing even before we began to speak about it with COVID 19. Social media can and does disconnect us from each other. In Wild Kingdom, I use imagery employing fictional backgrounds that I have photographed based on dioramas from many different natural history museums around the United States.

I use these faux backgrounds as the starting point for a representational narrative to make a tableau setting. In my travels, I have photographed hundreds of people, all of them unawares I was shooting them, while they were preoccupied using cell phones or engaged in some third person activity. From this archives of images, I montage a figure or groups of people into the diorama background that adds to the mise en scene. In the tableau setting they are surrounded by different species of animals who react to this intrusion of a new species in a variety of ways. We, as the viewer, assume the role and point of view of anthropologist, examining ourselves in the act of distancing from our environment.

In Wild Kingdom I explore how people struggle to be in the moment, using filters to distract themselves from an authentic engagement with person to person relationships. When my work was exhibited in Los Angeles, three arts critics had interesting comments about Wild Kingdom.

Christopher Knight of the LA Times said: “The signal being sent at Coagula Curatorial is sardonic – an elaborate engagement with the self-absorbed condition of worldly disengagement.”

Lisa Derick of the Huffington Post wrote: “Campbell’s clear and clever observations/commentaries on society’s obsession with our smart phones and social media to the exclusion of our surroundings stand strongly on their own — but are rendered even more profound with the burnishing of current events.”

Peter Frank in Artillery Magazine wrote “Campbell piles the ludicrous on the poignant, pathos on bathos, in a hall-of-mirrors satire that keeps unfolding long after you’ve looked at his artworks.”

Their comments reflect my artistic mission, which follows;

We live in a time of intense social, environmental and spiritual change. My practice seeks to find alignment with the meanings behind these transformations. I am making art that explores the behavior of ordinary people who find themselves in extraordinary circumstances.