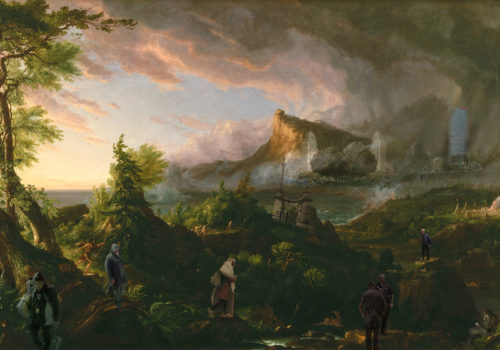 Originating in antiquity in Greece, Arcadia is a poetic space characterized by bountiful natural splendor and harmony, The inhabitants of Arcadia lived in the pure manner of the Golden Age, without the pride and avarice that corrupted other regions. During this age, peace and harmony prevailed, people did not have to work to feed themselves for the earth provided food in abundance. They lived to a very old age with a youthful appearance, eventually dying peacefully, with spirits living on as “guardians.” Plato, in his histories, recounts the golden race of humans who came first, who were good and noble.

Overtime Arcadia became a romantic image that is unattainable, a lost Eden. It lives on in our collective unconscious as a desire to return to Arcadia, at one with nature; unsullied, pure, enfolded in the womb of a poetic universe, a lost Eden. Arcadia’s existence is eternally elusive as humans become self-aware, first over populating it, and then attempting to shape its image to be a reflection of ourselves, containing all our imperfections. Nevertheless, like Plato’s original humans, our deepest aspirations to the good, the noble, and beautiful remain genuine.

The work in this series of photographs is based on 18th century artist north American Thomas Cole. Urged forward by the essays of Ralph Waldo Emerson, his landscapes and allegorical paintings established the first ‘American’ fine art movement. A conservative white male very much a product of his time, Cole embodied all the biases and racist assumptions that became a primary legacy of United States colonial history.

From Art and Antiques in 1994, written by Elizabeth Licata, is the following description of Cole:

The artist celebrates the American wilderness, typically using the image of the Native American as a symbol of untamed nature, rather than as an inhabitant of the natural world. Cole sincerely believed that Native Americans and Africans were inferior beings and feared them as “bestial creatures who might arise and eradicate the European settlers.” For this reason, among others, he was in favor of the cultivation of the wild. At the same time, Cole detested the speedy settlement of America¹s interior, writing in his journal in 1829, “Nothing is more disagreeable to me than the sight of lands that on just clearing with its prostrate tress–black stumps burnt and deformed–All the native beauty of the forest taken away by improving man–And alas he replaces it with none of the beauties of Art–.”

In my photographs, I use Cole’s work as a background that I intervene into by compositing my contemporary images. My intention is to examine some of the contradictions and assumptions implicit in the original paintings. In Almost Arcadia, I am unpacking the U.S. legacy of colonization, displacement, and Manifest Destiny, the 19th-century doctrine and belief that the expansion of the US throughout the American continents was justified by God, and inevitable.

And at the same time, in this moment of intense climate change and a warming world, I think about the ideal of Arcadia and the wonder of it, as the Greeks did long ago. Cole’s painting contained a natural world that once existed in North America. The public popularity of his paintings, revealing for the first time what seemed like a vast landscape, ironically propelled the colonization of North America unrelentingly forward.