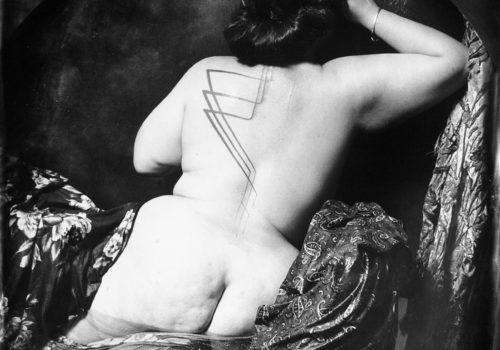 Charleroi’s photography museum has repeatedly received an honorary title such as ‘Best photography museum’ in the Belgian national press, others have labelled it ‘best in Europe’, while some visitors even rate it as the ‘best in the world’. Naturally it’s nice if one gets this accolade, but it is a reputation that you have to live up to, again and again. And the museum is succeeding with a wonderful spring selection. They present no fewer than four very strong photographic projects and an idiosyncratic short film.

Joel-Peter Witkin (1939) is one of the great names of contemporary photography, and that is already a challenge. Next to Witkin they have invited Debi Cornwall (1973) with “Welcome to Camp America”, an American lawyer & photographer with a critical view on human rights and Guantánamo. The third venue is the Belgian photographer Peter Henry Waterschoot (1969) who shows “Sunset Memory”, an intuitive poetic series of images created during lonely nightly walks somewhere between Belgium and Japan, between Ostend and Osaka. More will follow later on Cornwall & Waterschoot in two separate contributions.

The fourth photo exhibition in the Gallery du Soir of the Photo Museum gives an opportunity to upcoming talent. Bruno Oliveira (1993) is a young and promising photographer with Luxembourg-Portuguese roots. He first decides to follow a fairly classic educational pathway until he participated in a photo competition. Against all odds, he ended up high, very high in the ranking. It opened his eyes, and promptly decided to change course and enrolled in the art academy of La Cambre. His entry today shows work where he focused on “Generation Y”, the so-called “Millennials”. He photographed his own circle of friends, but a bit as an outsider. His friends are starting to settle in, but he seems to stay forever young – just like Peter Pan. His images express his own visual language with sparkling colours and his distinctive compositions. “Back to Neverland” is a tribute to the young men and women and their world, or should it be read as a farewell to adolescence and as a story of coming of age? For his presentation, Oliveira surely emphasizes adolescence, the unfinished, the fleeting, as if he himself is putting the quality of his work into perspective: these are sheets, folded in four, pinned up, just like posters from the room of the boy who doesn’t want to grow up… Certainly a promising photographer !

The short film Traunstein by Julie Gasemi & Nicolas Dufranne (1977) is a cross story about relationships between people, but has much more in common with the surrealist masterpiece “Un Chien Andalou” of Bunuel & Dali than, for example, with romantic love flick. It is an alienating love story with recognizable / unknown characters & locations, with an elusive / incomprehensible passage of time and with actors who communicate in an unknown language that in turn comes across as very familiar. The title Traunstein refers to a town deep in the south of Bavaria, but the film has nothing to do with it. The title evokes an association with Traumstein or Dream Castle – but then again not really. A film as elusive as love and human relationships, highly recommended to watch in the Boite Noire.

Witkin’s exhibition in Charleroi is entitled “Le Grand Atelier de Joel-Peter Witkin“, a title referring to two key works from the exhibition “Courbet in Rejlander’s Pool” (1985) & “The Studio of the Painter” (1990). With the introduction of photography, Courbet (like Manet) realized that painting and photography (represented by Rejlander) would inevitably go their own way. Witkin, on the other hand, tries again to bridge this gap. Immersed in art history, every image, every sketch refers to Van Eyck, Archimbaldo, Velasquez, Goya, Rops, Ensor, Courbet, Picasso and Man Ray – to name just a few.

But it is not only the love for art that determines his frame of mind: as the son of a Jewish father of Russian origin and a devout Catholic mother of Italian origin, he defines himself as a deeply religious person. He feels uncomfortable in a laicized world where he says “relativism dominates and morality is in free fall“. He juxtaposes it with the absolute truth of the divine.

He also extends his ideas about contemporary society to photography. He argues: “Most photography today is a withered dying tree. It’s the dead nature of dead hearts and souls ” and he condemns the unbridled hunger for wealth of some photographers.

A sketch dated 07/13/2016 shows “Christ driving out the money changing artists from the temple of art” – but he is also very explicit about who those artists are: Koons & Cicciolina, Sherman, Goldin & Hockney. In contrast Witkin , emphasizes that his art:” must express an originality, an artistic eccentricity which parallels the majesty & despair of human life. How else can I offer my prayers (my photographs) to God…”

And in the latter we find two more aspects of Witkin: the artistic eccentricity and the sense of the macabre (and this is an understatement). Witkin plays with death, with suffering, with the hideous and the revolting. It is reminiscent of the films Freaks (1932) by Tod Browning or The Elephant Man (1980) by David Lynch, where the hideous is presented as relaxation for an eager audience addicted to cheap kicks. That audience scares away, judges, condemns and erases “the other” away. Ultimately, the moral question remains: who is the monster – is it that person who is exposed stripped of his humanity, or is it the public? Precisely this reversal is relevant with Witkin, whatever he shows, it is part of humanity and of the human condition, or translated into the language of Witkin “it is part of Creation”.

Witkin is an old soul in a modern body. He repeatedly returns to the imagery and compositions of the Renaissance, the Baroque or the 19th century. He translates Memento Mori and Vanitas scenes for a contemporary audience: we don’t pass carelessly by his images, he gives a sharp edge, he seeks to shock his audience. Artistry is not without obligation for him, he works as an old master on a project for up to one year, makes sketches, mobilizes a whole team to set out a grand tableau, adjusts it and then finally he creates one image. But it doesn’t stop there: only after a long post-production is the final image released. He frequently intervenes physically on the negative by, for example, scratching it. The exhibition provides a hint of his creative process by showing a selection of sketches on the first floor of the museum.

Why visit: The exhibition is the photo museum’s own creation, where director Xavier Canonne was able to choose from the collection of the Parisian gallery owner Baudoin Lebon, and the exhibition offers images from the artist’s 50-year career. It shows a fine selection of the unique, individual and distinctive oeuvre of one of the influential photographers of the 20th century, in a strong and well-cared-for scenography: the visitor is literally absorbed into Witkin’s surreal world from the very first moment.

As always with an exhibition by Witkin, a footnote, some images may offend certain visitors.

No publication was issued for the Witkin exhibition. However, there is an extensive bibliography of publications about the author. The beautiful bilingual French/English publication of the Bibliothèque Nationale de France Joel-Peter Witkin Enfer ou Ciel / Heaven or Hell published by Anne Biroleau (Hardcover, 239 p., Illustrations in colour & b/w, 31 x 23 cm) is still a recommendable introduction to Witkin. Images of the photographer are confronted with the classic sources of inspiration and the photographer has his own entry in the accompanying text. Enfer ou Ciel/Heaven or Hell is still available at the Baudoin Lebon Gallery, 42 Rue de Montmorency, 75003 Paris, info@baudoin-lebon.com