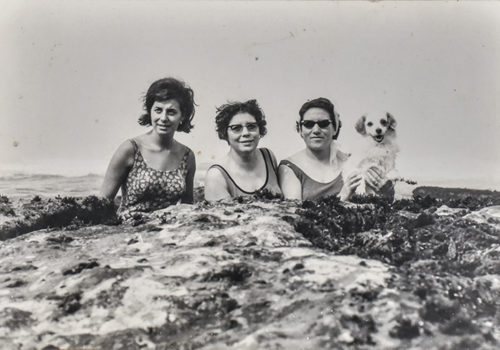 “ ‘Accept it – A Portuguese Album 1919-1979’ is the photo album of a fictional Portuguese family that I created from scratch,” says Céline Gaille to introduce her book. “The story takes place in Lisbon, Portugal, Guinea Bissau, and Angola, the former Portuguese colonies of the 20th century. I designed and created this piece between 2014 and 2016. The book is published by The Eyes Publishing and is accompanied by an exhibition  during the International Festival Encontros da Imagem 2016,  scheduled from September to November 5th , in Braga, Portugal.”

This first-person photographic narrative of a woman in her fifties takes the form of a family photo album. Two letters, brief captions, and related documents lead the reader to discover these ninety intimate photographs from the 1920s to the end of the 1970s.

In 1979 in Lisbon, Fernanda made, for her oldest son who severed all ties with her, a family photo album to make a deeply moving revelation about their origins. Addressing him throughout the entirety of the album, she revisits their own family photos next to photographs received one year earlier from another woman, Catarina, who claims to be her sister in a shocking letter. Fernanda offers a new look of her own and uncovers an unknown world.

This divided family can also look at the history of its country, in this case, that of Portugal and the fallen colonial empire, its dictatorship, and the violence it carried. Finally, the reader faces a photographic illusion in a book where true and false do not contradict themselves. A family secret is revealed twice. Silence first of a woman, the mystery of an unknown father, of a distant sister, the unexplained separation of the son; things left unsaid thread throughout the pages of this album.