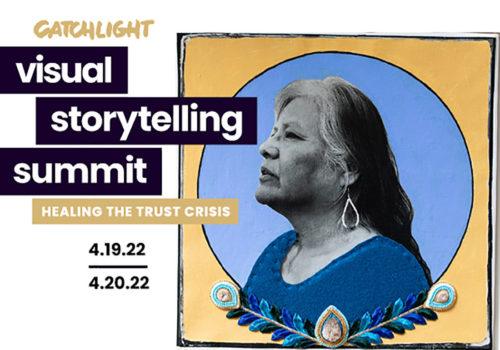 The non-profit media organization CatchLight will present its 2022 Visual Storytelling Summit April 19-20, 2022 at the Institute of Contemporary Art San Francisco. Two immersive days of conversation, inspiration, and community will feature some of the leading voices in visual storytelling. Our correspondent Marie Pellicier discussed with CatchLight CEO Elodie Maillet Storm.

Marie Pellicier (M.P.): Could you tell me more about CatchLight history and how the idea to create the Visual Storytelling Summit came?

The idea behind CatchLight is to leverage the power of storytelling, to inform, connect and transform communities. Our aim is really to support the field of visual storytelling, to make sure that all important stories get a chance to be told visually. We do that through different programs: one is our Global Fellowship program which annually awards $30,000 grants to three or four leaders working in visual storytelling for them to think long term about a project or an infrastructure they would like to build. And we have the CatchLight Local program which really looks into the decline of visual journalism on the local and community level, connected to the decline of local media and news organizations. Local journalists don’t necessarily have the resources to do visual journalism but we know how important is visual journalism at the local and community level. CathLight Local pairs partner newsrooms—with little or no visual storytelling capacity—with community-based visual journalists, the Local Fellows, to provide inclusive, in-depth, accurate, and locally contextualized information to the public.

We are also here to create a space for people in media, tech, and visual storytelling to come together. It feels like gathering people in storytelling happened mostly on the East coast of the US, with events like the National Geographic seminar, but there is very little of that happening on the West coast. CatchLight is in a unique position, because we are West coast-based in San Francisco where a lot of art audience is also involved in tech, to bring these worlds together.

M.P.:  You’ve said, “Visual storytelling is a vital part of the information ecosystem—yet one, which has been increasingly threatened by the decline of the media, large and small.” Could you define this decline? Do you talk about classic media and / or web media?

E.M.S.: I mean all media organizations. Because of the rise of Facebook and Google, there has been a decline. Advertising dollars not going to media organizations. As a result, we have lost more than 2000 newspapers in the US. Those media organizations started struggling, they started to fire visual journalists, first, not understanding their important role in the community, to see itself represented. And this is the link and representation that we are trying to build back in the ecosystem.

M.P.: All the panels seem to be interested in exploring how to continue to support the creation and diffusion of images in our moving and unstable society, involving questions of equality and world understanding. One of the panels is streamed from Addis Ababa and presented by Aida Muluneh, photographer and founder of the Addis Foto Fest. What brought you to work with Aida and what are the crosslines of your actions in visual storytelling diffusion on two different continents?

E.M.S.: We have been working very closely with Aida since she was awarded a CatchLight Global Fellowship in 2018 is not only an amazing visual artist herself and a photographer who actually started as a photojournalist, but she also represents what we are about, which is the sustainability of the field. The Fellowship allowed her to teach workshops in three different regions of Africa and really find the next generation of visual storytellers coming from the continent.

A lot of work we do with the Global Fellowship is not a one-year thing, so we continued working very closely with Aida throughout the years advising her about business models, and helping her work which has been awarded an OSF (Open Society Foundation) grant as well. Because she’s launching the Africa Foto Fair right after the Visual Storytelling summit, we thought it would be a great way for her to preview the curation that she puts together and also help, advertising the fair.

M.P.: Is this collaboration also a way to export the opportunities CatchLight grants offer?

E.M.S.: For sure, it’s showing another facette of our work including our long-term work with Aida, and across continents. Our work is global and having Global Fellows like her is important to us.

M.P.: One of the other panels is dedicated to the Web3 and its potential impact on photojournalism in the future, what is your vision on this subject?

E.M.S.: It’s really interesting to explore, essentially the internet is getting re-written as we speak. The way that the internet was written before did not really allow content authentication, it was really hard to see the sources of images, it was very easy to replicate images without metadata, and that’s usually problematic from an authenticity perspective, in terms of being able to track where images go and being able to monetize them. It’s interesting to think about how the internet has been rewritten with blockchain, how photography will be both authenticated, distributed and monetized. I thought it would be interesting for us to invite someone like Jonathan Dotan, who has done a lot of work around blockchain and authentication of images, to really start exploring that question.

M.P.: According to you it cannot be like a threat for photojournalism?

E.M.S.: It could be a threat, but it also could be an opportunity and we need to really think about it. It’s going to happen, around blockchain, around NFT, so it’s important to lay those questions on the table and to make sure that our world gets a chance to be connected to the people who are writing this new architecture.

M.P.: We can identify that throughout the conversations proposed at the Visual Storytelling Summit and CatchLight opportunities, the challenge is also to fight misinformation and highlight image-makers, as witnesses of our times. Is that correct?

E.M.S.: I really believe in the power of visual journalism and visual storytelling to help inform communities. There has not been a lot of talks about how to fight misinformation and how to use technology to do it, about the really important place that images play. But also about the role of the visual journalist. For example, Andrea Bruce and David Rodriguez Muñoz, have been very important for their communities. Andrea started a newsletter that is essentially bringing information to her community, on a weekly basis, in an entire news desert where there is no real possibilty to receive information and where she is fighting heavy misinformation about a lot of topics. And that’s very much the case also with David Rodriguez Muñoz in Salinas with The Salinas Californian newspaper. He is probably the most public face of that newspaper in his community of farmworkers and has an essential role to play, to bring information to the community. And again because of the visual nature of his work, he has more than doubled the Instagram following of that newspaper because where the community gathers.

Congress of the Union of Professional Photographers