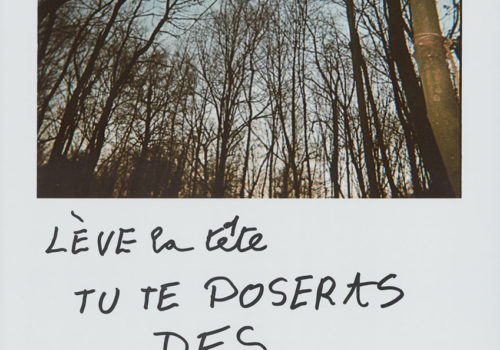 “I wanted you to imagine for yourself what I might have experienced in some places. I tried to make you understand what it means to be in the place of ”, confides JS, who lives in the Bois de Vincennes to Victorine, a professional photographer. They tell and confront their views it looks more like a dialogue. These photographs become an attempt to break the prejudices of a way of life often considered marginal and unthinkable.

JS and Victorine met over coffee thanks to the La Cloche association dedicated to creating social ties and changing views on life on the street. From this meeting was born the desire to create a dual project. Victorine begins by following JS in places that are part of his history: from the Bercy park in Paris, where he arrived in 2015, to the Bois de Vincennes where he has lived ever since.

A relationship is forged little by little but very quickly, a question arises: how to account for a reality that is not one’s own? They then decide to collaborate by each taking the camera with a constraint posed by JS: that of not taking “cliche” pictures of the world of the street.

We discover in some of his photographs, an almost omnipresent nature, a form of gentleness that contrasts with some of his writings in which we can feel anger.

“It is a cry, ‘help’ for all those who live in loneliness, isolation and the slowness of administrative procedures,” said JS.

Throughout this series, we deliberately did not dwell on the details of JS’s life in order to focus on the meeting of two perceptions from two different lifestyles. Each shot is followed by more intimate and natural exchange around their photographs without taboo. These become a way of communicating, more direct, more personal, without artifice.

“This project allowed me to express my anger,” says JS. On prints, writing becomes necessary. They tell and compare their views that look more like a dialogue. These photographs become an attempt to break the prejudices posed on a way of life often considered marginal and unthinkable.

“Au grand air” becomes a photographic discussion that does not try to talk about the “street world”, but rather to reveal a poetic facet of this way of life, which does not prevent loneliness and isolation. “We are peaceful here, there is real life in the woods”, concludes JS.

The 2021 winners will benefit from:

The two finalists are:

The Caritas Photo Sociale Award aims to promote the work of photographers who give visibility to poverty, precariousness and exclusion in France. By supporting new perspectives and a variety of photographic writings, the prize also aims to raise public awareness.

The composition of the jury reflects this ambition, bringing together experts in precariousness from the Caritas France Network and actors in photography with ever more varied profiles and perspectives. This year, it was chaired by Sarah Moon, an important figure in French photography whose commitment to people in precarious situation, for whom she has carried out actions around photography, resonates with the Caritas Photo Sociale Prize.