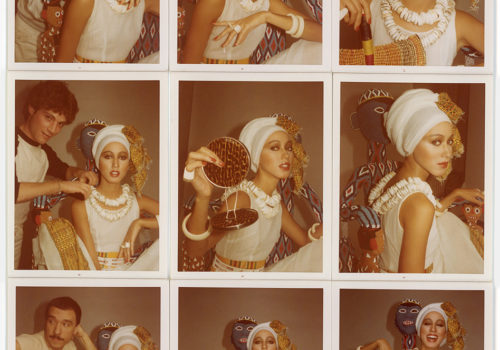 The Campredon Centre d’art presents a monographic exhibition by artist photographer and fashion illustrator Antonio Lopez, from June 5 to October 3, 2021, in partnership with the agency diChroma photography.

Antonio Lopez, born in Puerto Rico in 1943, remains one of the most important and remarkable figures in the fashion world from the 60s to the 80s. Very young, at the age of 7, his family moved to New York, his adopted city which would later become the great theater of his creation.

He studied at the Fashion Institute of Technology, where he met his partner, Juan Ramos, who exerted a major influence on all of his work, and accompany him in the development of his creative process.

From the 1960s, Antonio Lopez became a fashion illustrator, and was published in numerous magazines such as Vogue, Elle, The New York Times, or Harper’s Bazaar. He collaborated, in New York, with artists, publishers, such as Andy Warhol or Diana Vreeland, then moved to Paris in 1969. He worked there with Yves Saint-Laurent and Karl Lagerfeld for a few years, a time to become, he and his “Antonio’s Girls”, an emblematic figure of the Parisian fashion world.

Returning to New York in 1975, he worked tirelessly on numerous advertising campaign projects and perpetuated the brilliance of this meteoric career until his sudden death put an end to it once and for all. than 44 years old. Antonio Lopez died of AIDS on March 17, 1987, in Los Angeles, leaving behind a considerable body of work, an aesthetic and rhetorical statement that would dissolve in the thick of Art History.

If fashion was his subject, it was nonetheless his pretext. A pretext to tell the beauty, sensuality, sexuality, life, time. His time. Because fashion, as Coco Chanel will define it, “is not something that exists only in clothes. Fashion is in the air, carried by the wind. We can guess it. Fashion is in the sky, in the streets. ”

Fashion, Antonio Lopez wore it, embodied it, lived in it. It was a question of attitude, a way of life. He had a fiery, uplifting, passionate, luminous life, always carried to its climax by the vital impetus of his creation and his urge to seek without ever really caring to find.

And since for Antonio fashion was a pretext for generating forms, through his drawings, Collages, Instamatics, and Films, it was also a pretext for deconstructing languages ​​to free their meaning, and reconstruct his own, “this untranslatable body of languages ​​”.