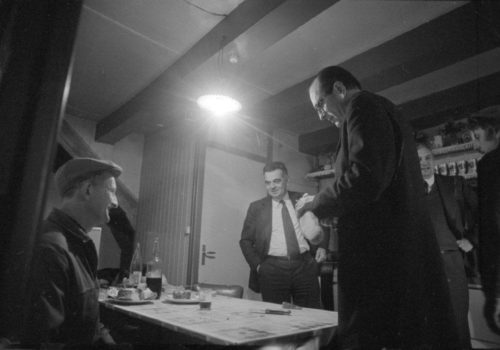 « What an adventure! That man is simply indefatigable!

An early riser and a night owl.

In Correze, it wasn’t unusual to see him indulging in two or three lunches, one after another, to avoid offending anyone. On afternoons driving through the countryside, on some very rough roads, he would at the cows on their backsides. Like a dealer at a livestock market, he taste-tested all the local cheeses and hams offered him, accepting all of the occasional shared drinks on the side.

Meeting after meeting, in small town hall rooms, he would address everyone by their first names and was familiar with all items on the agenda, from A to Z.

Making the rounds of the village bistro, he would remember, for example, that young Catherine had given birth to her second child, or that Joseph’s wife had been hospitalized in Ussel. He even asked whether she’d managed to get a good room and insisted that he be kept aware of her wellbeing.

He never showed any sign of fatigue and always seemed more than happy to stride across this great country of his.

From time to time I’d find him at my neighbour’s place, the district’s elected Communist official who owned the farm just behind the Chateau de Bity.
Over a drink, the then Prime Minister told me a story about his dog Jugurtha, whose mother Lasmine was a magnificent pointer, and a gift from Giscard.

Caring and attentive, he was always curious about those accompanying him, asking them incisive questions.

I particularly remember following him on a trip to the Soviet Union. We were travelling in a Russian government plane, from Moscow to Irkutsk in Siberia. Prime Minister Chirac was accompanied by President Podgorny and Andrei Gromyko, the Minister of Foreign Affairs.

The officials were seated in the front of the plane. The rear was reserved for the French and Russian journalists accompanying Chirac from Paris.
Being one of the last ones to board, I noticed that the Moscow based reporters from le Figaro and Liberation were being held up on the tarmac by security police in their imposing chapkas, the traditional Russian military hat.
– They don’t have visas for Siberia, explained the Russian bureau chief while instructing the two French journalists to back up.
– I ran, breaking protocol, and managed to inform Chirac about the situation.
– ‘All right, we won’t leave until your two colleagues are on board!’
Pandemonium broke out and we began imagining a “diplomatic incident”, but almost immediately, the imposing figures in their chapkas helped our comrades on board.

I’ve travelled with Chirac many times. During those flights, we developed a habit of playing gin-rummy and, over time, our relationship grew very close.

One day he promised to preside over my upcoming wedding ceremony. Although that day came right after his election as Mayor of Paris, he kept his promise with brio. »