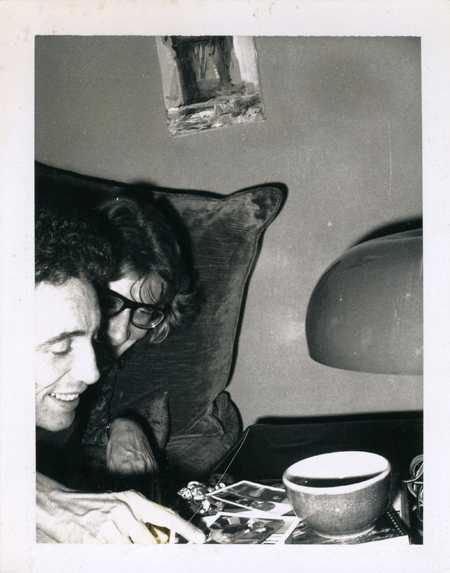 ‘I’m looking for the unexpected. I’m looking for the things I have never seen before.’ Robert Mapplethorpe Xavier Hufkens presents an exhibition of the early work by legendary American artist Robert Mapplethorpe in the new gallery space in rue Saint Georges, Brussels. This is a show that will enchant Mapplethorpe connoisseurs through the one off quality of the polaroid works and the chance to see the earliest seeds of lifelong friendships in the silver gelatin prints. The works equally introduce the novice and enthusiast to Mapplethorpe’s compelling and compulsive oeuvre, marked by extremes of elegance and grace. Mapplethorpe’s prints representing portraits, nudes, flowers, and erotic and sadomasochistic subjects dominated photography in the late 20th century. Less known are the Polaroid works that Mapplethorpe produced in the early 1970s. This special exhibition traces Robert Mapplethorpe’s use of instant photography from 1970 to 1975 and a selection of his early silver gelatin prints. The show brings together some hundred objects, many never exhibited before. Included are self-portraits, figure studies, still lifes, and portraits of lovers and close friends including Patti Smith, Sam Wagstaff and John McKendry. Best-known for the highly stylized and neoclassically inspired works he made between the late 1970s and his death in 1989, Mapplethorpe’s mature work was in fact preceded by an important but largely unknown body of photographs made with Polaroid cameras between 1970 and 1975, when Mapplethorpe was in his twenties. Many of these small, intimate polaroids in black and white like Eddie, 1972 and Nicky Waymouth, 1973 convey tenderness and vulnerability. Others depict a toughness and immediacy that would give way in later years to a more classical form. Unlike the highly crafted images Mapplethorpe staged in the studio, these disarming pictures are marked by spontaneity and invention. In the mid 70s, Mapplethorpe grew increasingly interested in documenting the New York S&M scene. The resulting photographs are shocking for their content and remarkable for their technical and formal mastery. In Jim, Sausalito from 1977, the main character is clad in leather boots, trousers and mask, all typical of the gay S&M scene. The triangular shape formed by his body is bathed in light from above, as his gloved hands hold on to the rungs of a ladder, which forms a grid of horizontals and verticals in the left half of the image. The man may look menacing, but he seems attracted to the light above. Mapplethorpe was constantly drawn to the ambiguous relationships between light and dark, good and bad, heaven and hell. Yet Mapplethorpe’s art always revealed the humanity and emotions of his subjects behind their leather, spikes, and chains. Mapplethorpe told ARTnews in late 1988, “I don’t like the particular word ‘shocking.’ I’m looking for the unexpected. I’m looking for things I’ve never seen before … I was in a position to take those pictures. I felt an obligation to do them. In 1975, Mapplethorpe began using a Hasselblad medium-format camera given to him by Sam Wagstaff, the visionary curator who became his benefactor and mentor. Mappelthorpe worked primarily in the studio and began producing large-scale still lifes of subjects such as lilies, gladioli, interiors, nudes, portraits and self-portraits. One of his earliest celebrity portraits, Patti Smith (1975), was carefully staged by Mapplethorpe and Smith, his lifelong friend. In this photograph, Smith broke radically from the image that women in rock were expected to assume, and embodies the androgyny often found in Mapplethorpe’s photographs. His portraits of Smith capture her loneliness and her independence, her sensitivity and her wildness. Around 1979 Mapplethorpe began to photograph black men. As Patricia Morrisroe wrote, he found that “he could extract a greater richness from the colour of their skin”, in particular the tonal range between the highlights and the shadows was more dramatic. In the close-up Bob Love, 1979 Mapplethorpe exploits the contrast between the highlights on his shoulder and face and the inky darkness of his neck and the back and top of his head. Robert Mapplethorpe was born in Floral Park, Queens, USA, in 1946 in New York. He earned a B.F.A. from Pratt Institute in Brooklyn, where he produced artwork in a variety of media, mainly collage. The shift to photography as Mapplethorpe’s sole means of expression happened gradually during the mid-1970s. He took his first photographs using a Polaroid camera, and later became known for his portraits of artists, architects, socialites, stars of pornographic films, members of the S&M community, and an array of other unique people, many of whom were personal friends. During the early 1980s, his photographs shifted to emphasize classical formal beauty, concentrating on statuesque male and female nudes, flowers, still lifes, and formal portraits. Mapplethorpe died in Boston in 1989. Robert Mapplethorpe: Au Début From June 7th to July 20th, 2013 Xavier Hufkens 107 rue St-Georges St-Jorisstraat 1 1050 Brussels Belgium