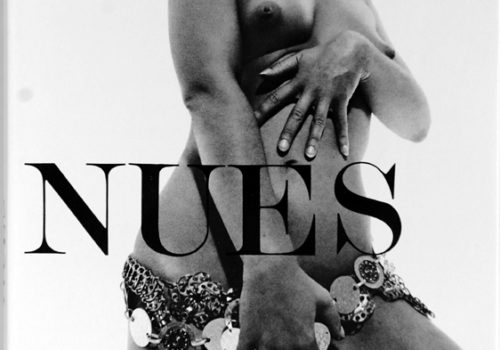 Bruno Mouron photographer and collector dived in his collection of over a thousand books for La Lettre. Classic titles like The Americans by Robert Frank (in all its editions), Paris La Nuit by Brassai, Photographies 1920-1934 by Man Ray or The Map by Kawada could have been obvious choices. Bruno preferred to present some more unusual books, not especially expensive and mostly for most of them not yet listed in titles such are Martin Parr’s and the Book of 101 Books.

The work of Jean Clemmer for example is to often limited to his photographs realized with Salvador Dali, the book Nues (CANNED CANDIES) presenting his nudes with the metallic accessories of Paco Rabanne is much less known.

Bruno Mouron and Pascal Rostain currently prepare a book with Robert Laffont publishing on the Black&White archives of their agency Sphinx which will cover the time period of the Sixties to the Eighties. One of their conceptual photograph from the series STAR TRASH was exhibited last week at Scope Basel.

Jean Clemmer photographs the models only wearing the accessories by Paco Rabanne, the women hidden behind the metallic pieces appears even more sexy.

Klaus Staeck, German director and photographer appropriates press and advertising photographs which he lays out in this art book showing images of violence, demonstrating a form of visual pornography.

44 photographs of beautiful women busts, all different. In 1974,plastic surgery was not yet invading the world.

An inexpensive book which I think has aplace in a collection.

These are not professional models posing for the photographer Marc Riviere but some free and pretty women which display the charm that only French women have.

Second book by WAKABAYASHI après « ADAM AND EVE » published in 1970.

A large format book where the 98 photographs printed only with deep blacks and no greys accent the unconventional approach of the photographer. With peoms by Arthur Rimbaud.

This book is impossible to find, even in Japan.

Once again, poetry is associated with the image in this book of 54 photographs of women in ecstasy.

Composed in most part of feminin nudes by the German photographer Ica Vilander. She shows her inside knowledge of the women body and his fragility.

Her view on women translate in images of extreme sensibility.

The layout and typography of this book was very modern for the time.

We don’t need to present Helmut Newton, one of the greatest photographer of the 20th Century along with Irving Penn and Richard Avedon.

Unthinkable not to have a book by him in a collection.