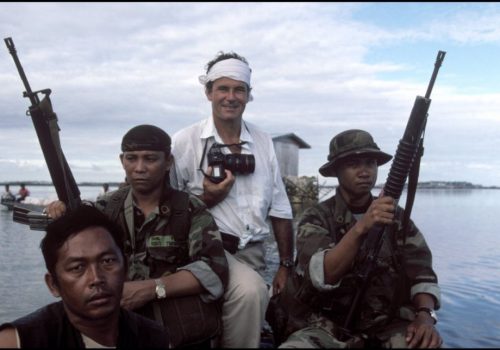 Bruno Barbey has just passed away. Of course, we dedicate this whole day to him.

A great sadness and a nice nostalgic memory.

The first time we met it was in Algiers.

Bruno had come with his wife Caroline to attend the 1st Pan African Festival in Algiers.

They were both very handsome.

Archie Shepp was playing in the Casbah.

“Photography is the only language that can be understood anywhere in the world.”

Here is the press release from the Académie des beaux-arts, where he was elected on April 13, 2016.

Mr. Laurent Petitgirard, Permanent Secretary, and the members of the Académie des beaux-arts are very sad to announce the death of their colleague Bruno Barbey, on November 9, 2020 at the age of 79 years. Bruno Barbey was a member of the photography section of the Academy, where he was elected on April 13, 2016.

His disappearance is a great loss for the Company in which he participated very actively. The Académie des beaux-arts sends its deepest condolences to his wife Caroline, his family and loved ones.

Born in Morocco, of dual Swiss and French nationality, Bruno Barbey studied photography and graphic arts at the Ecole des Arts et Métiers in Vevey (Switzerland). Thanks to a first black and white reportage devoted to the Italian society in the 1960s and supported by Robert Delpire, he met Marc Riboud and Henri Cartier-Bresson and was co-opted into the Magnum agency at the age of 25. Within Magnum, he held the positions of vice-president for Europe from 1978 to 1979 and was president of Magnum International from 1992 to 1995. Alongside his work as an author, he photographed major events historical figures of our time. Bruno Barbey often returned to the scene of his first reportages, sometimes ten or thirty years later, and saw photography as a work of memory. Bruno Barbey was the author of some thirty books, and has collaborated with authors such as Jean-Marie Le Clézio, Tahar Ben Jelloun, Czeslaw Milosz, Jean Genet, Bernard Guetta, Philippe Tesson and Dom Moraes.

In 1999, the Petit Palais in Paris organized a major exhibition of his photographs taken in Morocco over a period of thirty years. In 2016, the Maison Européenne de la Photographie in Paris, exhibited a retrospective of his photos which has been regularly presented throughout the world ever since. Bruno Barbey was the author of some sixty exhibitions which are still circulating in France and abroad today, like the one which has just been held in Istanbul (Turkey).

For several years, Bruno Barbey worked almost exclusively in color and his photographs are part of many collections of major international museums.

In 2018, Bruno Barbey published a book dedicated to the events of May 68, in collaboration with the writer Philippe Tesson. His latest book Color of China (PostWave editions in Beijing), was published in 2019.