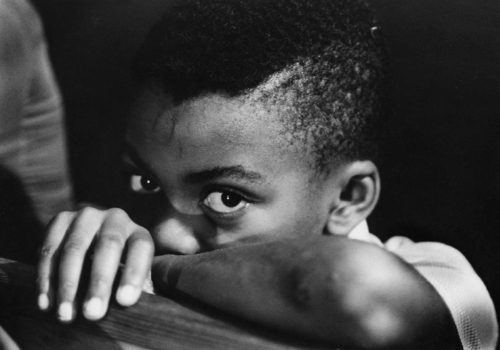 Chester Higgins walked into the photographic studio of P.H. Polk in Alabama in 1967 to pick up a photograph for an advertisement in his Tuskegee University newspaper. He left with something entirely unexpected–the first awareness of a passion that would unfold throughout his life. Higgins caught a glimpse that day of photographs hanging behind Polk’s studio curtains that he had taken during the 1930s of people in the rural South. The beauty, dignity and strength of character in those photographs captivated Higgins, and reminded him of the people he knew and had seen in his church and among farmers in rural Alabama where he grew up. The power of Polk’s images inspired Higgins to ask the elder photographer several days later if he would teach him to use Polk’s own camera.

Surprised by the naïve and audacious request, Polk lent Higgins his camera for a few hours. This extraordinary gesture of generosity and the valuable information and insights he subsequently gave Higgins, started the young man on a long and extraordinary journey with photography.

Higgins bought his own camera the following year. It was the summer of 1968 at the height of the civil rights movement. At that time the media in Alabama was publishing photographs that depicted Black men as “vicious criminals,” as Higgins described. Those images were very different than the ones Higgins made at the time that presented the protestors against Jim Crow laws as serious and decent men like himself.

Looking to further his knowledge of photography, Higgins visited New York City during the summer of 1969, where he met the photographer Arthur Rothstein, who was the Director of Photography at Look Magazine then. Rothstein asked Higgins what message he wanted to convey in his photographs, and the young Higgins responded with a statement that has resounded throughout his work to the present:

“Our media show no positive images of decent black people…men and women who work hard, go to church, have respectful and loving relationships. We need images of black people that reflect the fullness of our lives.”

After graduating from Tuskegee University in 1970, he moved to New York City where Rothstein guided him and introduced him to Cornell Capa, Gordon Parks and Romare Bearden. Higgins’s relationship with these men was of great importance to him professionally and artistically.

Polk had told Higgins that, “there is no camera that can make a picture…, only your eyes can make a picture,” and Parks had emphasized that, “great photographs are made with the heart, not necessarily with the eye.” These two ideas have guided Higgins in his work throughout his life.

Higgins became a staff photographer for The New York Times in 1975, and worked as a news photographer there until 2014. After spending an eight-hour day working at the Times, he would then shoot for his own work. As he accumulated vacation time, he used it to travel. His first trip to Africa, however, had been in 1971, when he went to Senegal to shoot for an article in Essence Magazine.

The following year he went to Ghana, and he returned to both Ghana and Senegal over the next several years. During his first trip to Africa, the goals for his photographic work expanded into:

“…a lifelong study of the mannerisms, culture, and traditions of my people–mirror images of the people of my childhood.”

The exhibition Chester Higgins: The Indelible Spirit at the Bruce Silverstein Gallery charts the early course of Higgins’s journey from the late 1960s through the 1990s with a selection of images that highlight his career from his beginnings as a talented student living in Alabama, through his early years in New York, and his travels to Senegal and Ghana.

Higgins photographs people of all generations–children looking tentatively out at the world; young adults full of strength and vitality; and elders, whose wisdom he evokes in quiet, peaceful circumstances. Whether at rest, work, or in social situations, alone, or with family, friends, and lovers, Higgins’s work reflects his respect for moments of deep contemplation. Through light, composition and a superb attentiveness to the flow of life, he creates images in which the sheer beauty of light and form conjure the magical spirit of an individual or group.

Higgins often shoots into the light. In some cases the contrasts between light and form become silhouettes in which the details of his subject are obscured and the essence of the moment revealed. At other times Higgins focuses on the sculptural form of a figure, on its texture emphasized and enveloped in light and shadow. Whether taking a close up or distanced view, focusing on detail or general form, it is the energy and spirit in his photographs that are most distinctive. Higgins finds the moment that lies between the physical and the spiritual. This is the profound and sweet spot in his photographs, the moment when something unexplainable opens up—an indelible spirit in his work that cannot be erased.

Photographer and author Chester Higgins was born in Alabama in 1946, and was formally educated at Tuskegee University, graduating in 1970. Experiences with his family’s church community, as well as with college campus student protest, were formative in developing the direction Higgins’s artistic practice. Higgins’s oeuvre portrays the dignity of the African American and African diasporic communities, and this work has brought Higgins all over the world, and to Africa in particular, many times.

Higgins worked as a staff photographer for The New York Times from 1975 until 2014, and is the author of several publications, including Black Woman (1970); Drums of Life (1974); Feeling the Spirit: Searching the World for the People of Africa (1994); Elder Grace: The Nobility of Aging (2000); and Echo of the Spirit: A Photographer’s Journey (2004). Higgins’s work has been the subject of many international exhibitions, and is held in notable collections, such as The Museum of Modern Art, New York; Museum of Modern Art, San Francisco; Virginia Museum of Fine Art, Richmond, and The Brooklyn Museum of Art. Higgins lives and works in Brooklyn, New York.