BredaPhoto 2020 : The Best of Times, The Worst of Times – open indoor exhibitions 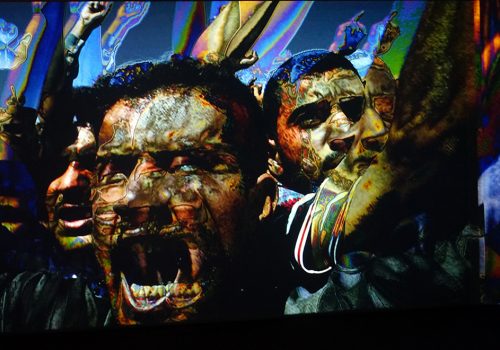 The indoor exhibitions of “The Best of Times, The Worst of Times” also offer challenging projects, here is a selection.

Ed Kashi (1957) is a documentary photographer of International renown, member of the VII agency. For his contribution “The Enigma Room” , Kashi went through his archive that spans over 40 years. His images are combined in an associative way and enhanced with a special soundscape. The result is not a sequence of still images, but an engaging and visually challenging presentation. Upon his selection he stated:

“In these uncertain times, “The Enigma Room” is a deeply personal and timeless audiovisual journey that meditates on the cycle of life. It forces the viewer to stop, watch, listen, feel, and ultimately draw their own conclusions about what it means to them. The choice of my work for the upcoming edition of the BredaPhoto Festival is also a confirmation of life and will be part of my continued hope for our future after the corona virus”

Zurumbático means to be stunned by the bizarre, the unusual. This spirit is also reflected in the surrealistic (or magical-realistic if you prefer) approach of artists, writers and photographers like Llosa, Borges, Kahlo, Bravo, Horna, Mendieta & Iturbide. Luis Cobelo’s (1970) project is an endless journey to the place where “One hundred years of solitude”, work of the writer Gabriel García Márquez was born. For Cobelo “Zurumbático is a tunnel of feelings, sensations, impressions and especial events… Immersed in this dimension, … the unusual, the everyday, the comic, even the tragic, has no explanation.”

Dandelion Eghosa (1994) is a new voice from Nigeria, who identifies as a nonbinary visual artist. With her work the artist wants to “document expressions in everyday life” and to “highlight marginalized identities particularly the Afro-LGBTQ+ community”. The project presented at BredaPhoto corresponds with this, with colorful, surprising, refreshing and challenging images. They are not ‘photographs’ but the subtle result of a mixed media approach – certainly a promising artist.

Tanya Habjouqa (1975) focuses on gender, social, and human rights issues in the Middle East. Her stories are about a region we know all too well from the news reports, but the image she presents is completely different from the classic image of the region. No conflicts of youngsters with military, but an image full of nuance and diversity. Habjouqa approaches her subjects with sensitivity but also with an eye for the absurd.

“We don’t have homosexuals in Iran, as in your country,” then Iranian President Mahmoud Ahmadinejad said in a speech in the United States in 2007. This statement prompted the Swiss photographer from Iranian descend Laurence Rasti (1990) to photograph Iranian homosexual refugees in the Turkish city of Denizli. In poetic images she does not portray men and women as victims of political oppression, but rather records their current situation. Her subjects are waiting for an opportunity to live somewhere where they don’t have to hide their sexuality. The result is a poignant series of partly anonymous portraits about identity and gender.

Club Solo is next to Chassépark, and profiles itself as a gallery dedicated to contemporary art: for BredaPhoto they invited visual artist Marjolein Dijkman (1978). In her research Dijkman bridges family history, personal anecdote and the universe; man and cosmos; the intuitive and the scientific; impression and objective perception; past, present and future. Her broad perspective of sources and perceptions is reflected in a similar wealth of approaches in her oeuvre. Collections of found images are combined with objects, sculptures, video and photography. This exposition abducts you on a multimedia journey from Earth to space, with impressive projections and abstract pictures. This exhibition is organized in collaboration with the renowned museum of contemporary art SMAK from Ghent, and also shows work by Johan Dewilde (1964) and Nina Cannell (1979). A publication of Marjolijn Dijkman, Radiant Matter, 88p, Onomatopee 146, 2017 is on offer @ €14.