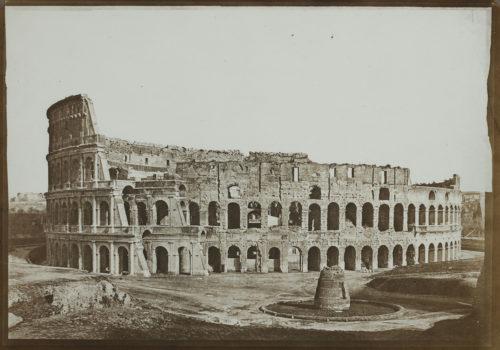 The Bowdoin College Museum of Art presents In Light of Rome: Early Photography in the Capital of the Art World, 1842–1871, an exhibition exploring the history of photography through documentation of Rome in the earliest years of the new medium. Featuring 112 objects from nearly fifty transnational photographers, the exhibition includes daguerreotypes, calotypes, salt prints, and negatives—many of which have never been exhibited before—and will expand the understanding of Rome’s place in the evolution of early photography and the pivotal role it played in the refinement and technical development of the medium in the 19th century. The works in the exhibition are on loan from the collection of Mary K. and John F. McGuigan Jr. of Harpswell, Maine, one of the most comprehensive groups of nineteenth-century Roman photographs held outside Italy. The exhibition will be accompanied by a catalogue to be published by Pennsylvania State University Press featuring a history of early methods of photography, artist biographies, and a chronology of Roman history, all alongside the groundbreaking images captured by these innovative artists.

“The advent of photography transformed how one saw and understood the seen world, pausing time and letting viewers imagine themselves in the scene,” said Frank Goodyear, co-director of the museum and co-curator of the exhibition. “In Light of Rome traces the technological innovations and advancements in photography through images of one of the most recognizable and photographed destinations in the world. It is easy to take photography of the Eternal City for granted in our modern times, so this exhibition is a special chance to slow down and remember the wonder inspired by the invention of photography.”

Artists featured in the exhibition include some of the earliest pioneers of the medium, like French daguerreotypist Joseph-Philibert Girault de Prangey and the Welsh calotypist Calvert Richard Jones. Also included are works from the Roman School of Photography and its successors, among them James Anderson and Robert Macpherson of Britain; Frédéric Flachéron, Firmin Eugène Le Dien, and Gustave Le Gray of France; and Giacomo Caneva, Adriano de Bonis, and Pietro Dovizielli of Italy. Among the images are landscapes, portraits, images of architecture and sculpture, and pictures of daily life in Rome at the time—a city with a population of only 160,000, yet still the cosmopolitan capital of the world. Museum visitors will get to see early photographic images of some of the most well-known ancient attractions from the Eternal City, including The Arch of Titus, The Forum, The Colosseum, The Arch of Constantine, and the Trevi Fountain. Natural photographs include the banks of the Tiber River and the Gardens of the Villa Medici, among others—sites that continue to attract the attention, and camera lenses, of contemporary visitors.

The improvements to techniques of photography are also explored in the exhibition, starting with daguerreotypes, which produced only one image on a silver-plated cooper plate. Next came calotypes, which allowed multiple prints from one negative, making photography more affordable, accessible, and transportable. The Roman School of Photography, a group of international photographers who lived and worked together in Rome, made crucial improvements and adaptations of the techniques used in the photography process.

“It is exciting to be collaborating with the Bowdoin College Museum of Art to share works from this collection and underscore Rome’s connections to the history of photography as an artistic medium,” said John F. McGuigan Jr., the collector of the works and the co-curator of the exhibition. “For several decades now, I have been researching and collecting photographic works from this period, and this is a great opportunity to make them publicly accessible to a wide audience, both through the exhibition and the accompanying catalogue.”

In addition to images of historical sites and monuments, the exhibition gives a fascinating peek into Roman historical events, including the Battle of Mentana, a fight for Rome between the French-Papal troops and Italian volunteers in 1867. Photographers also documented the evolution of historic Rome, including the destruction of Portia Pia, attacked in September 1870, and the rebuilding of the embankments on the Tiber River.

The exhibition also includes little-seen portraits of the vibrant international artists’ community in Rome, including American sculptor Harriet Hosmer, alongside her studio assistants. Hosmer had defected to Italy to get the art education she could not receive in the States. She used photography in her artistic practice, sending photographs of work in progress to friends for feedback. She also used photography as evidence that she, and not a man as rumored, had sculpted her masterpieces. Presumed self-portraits of Giacomo Caneva and Emil Braun are also featured. Other portraits include a group shot of Pope Pius IX and members of his Papal Court from 1868 by Antonio d’Alessandri and Paolo Francesco d’Alessandri and a circa 1860 photo of painter John Badsby Chapman in his studio by John Linton Chapman.

The Bowdoin College Museum of Art is the cornerstone of the arts and culture at Bowdoin. One of the earliest collegiate art collections in the nation, it came into being through the 1811 bequest of James Bowdoin III of 79 European paintings and a portfolio of 140 master drawings. The collection has been expanded through the generosity of the Bowdoin family, alumni and friends, and now numbers more than 20,000 objects, including paintings, sculpture, works on paper, decorative arts and artifacts from prehistory to the present from civilizations around the world.