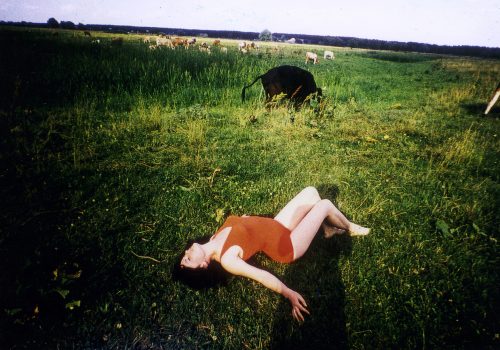 Where are your seventeen years? *

* Title of the song by Vladimir Vysotsky

(Part 2) selected photographs by Boris Mikhailov from the 1960s-1970s appear, taken from the eponymous series. These are often shown at exhibitions but were not included in the first book, published in 2007. What can explain the sudden attention the author has given to this series which was created almost fifty years ago? In the words of curator David Riff, maybe it was the point at which the birth of Mikhailov the artist took place from amateur photography. The author himself says that this series is like a capsule containing the embryo of all his following works and explorations.

By some strange coincidence that the openness and sensitivity of a young man, exploring the world around him with great interest, coincided with the Krushchev Thaw, when a window of opportunity suddenly opened. The series is something like a watershed in Mikhailov’s story, who was fired for a photo of naked women, but then found his artistic language, which he subsequently developed and perfected, and which entered into the story of photography in the USSR.

In acknowledgement of this, in 2018 Suzi et Cetera was included in the exhibition and research project Primula. Early colour in Russian photography at the Russian Museum of Photography. The series actually coincided with the start of mass amateur colour photography in the country.

The production of colour film in the USSR started in 1946, but for a few decades colour photos were only used for official news or staged reports and were subordinate to the strict canon of socialist realism.

In the 60s the new technology became available to the public, and as a result of this colour photography was taken out of the pathetic-official, the collective and came into the private, almost intimate sphere at the same point in time when the consciousness of the Soviet person started to change, producing serious shifts in the system. It was at this very moment that Mikhailov started to photograph nudes, with their innocence and subjective sexuality, cityscapes and still-lifes with absurd compositions, which subsequently became the series Suzi et Cetera.

Perhaps the person best able to describe Suzi was not an art critic or a researcher of Soviet photography, but any anonymous visitor to the exhibition where the series was on display: “I’m listing these at random: the underground, the truth of life, imitation of naive art, it’s funny, domestic erotica, amateur antisovietism, I recognise my homeland, provocative naked ladies, alcoholism, familiar guys, getting nauseous from a medical photo, the consequences of industrialisation, pollution of the environment, taken on some kind of rubbish heap, a passion for photographing all that is forbidden,an intellectual’s irony, the complete absence of pretension, positively and negatively, and as soon as he convinced her to undress, bright colours, polaroid colours, dust on the prints, vignetting, real vintage, grey-black bw, faultless lomographic composition, multi-figure composition, inventive still-life, an amazing place, for some reason nobody is looking into the camera, you could only take a photo like this in the USSR, it doesn’t resemble anything, in general God knows how long it’s been since I felt pleasure like this”.