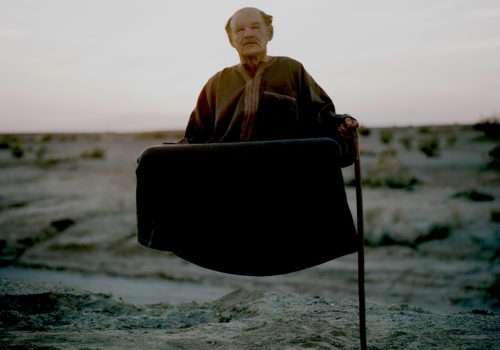 On the inside back cover of Bob Zahn’s new book Slab City is a close-up of a sign on an impromptu guard post: a peace symbol and the words Slab City The Last Free Place.

Slab City takes you to this last free place in all its messy glory. It’s a book filled with pictures of people who choose ragged clothes, hard time living, and an Instagram-free existence as their cultural message.

The cost of living here is doing without the things we take for granted; money, work, and safety nets. There are no stores, no doctors, and no police. Instead there is a rude community and a shared belief that this place is worth it. Zahn shows you what that looks like with portraits and pictures carefully made over six years. He works with a medium format camera and film, his process telling you from the outset his belief that these are people worth seeing.

What he shows you are rough-hewn faces, many filled with years of pain. But they look different than outsiders in the city. They face the camera knowing they have deliberately made this hard choice, to make their way in this difficult place. There is determination here, and survivor strength and sometimes grace in their rough exteriors.

Slab City is different from the encampments of the unhoused you probably see not far from home if you live in a city. It is surrounded by miles of bleak desert emptiness, set far from pretty Palm Springs or the make-believe desert of Burning Man. To live here is to turn your back on scavenging an existence from the housed and the working, and that shows in the faces and the postures and the words of the people that Zahn has invited to sit in front of his camera.

There is respect between see-er and seen here, and no rush to judgment, but instead a deliberate, measured meeting between equals. For years Zahn returned again and again, gaining the trust and respect of the community and earning the name Fotobob along the way. The Slabbers pose in front of his camera the way people used to pose before cameras were ubiquitous, revealing themselves in an older more guileless way. It’s fine work by a fine photographer.

A book by Bob Zahn