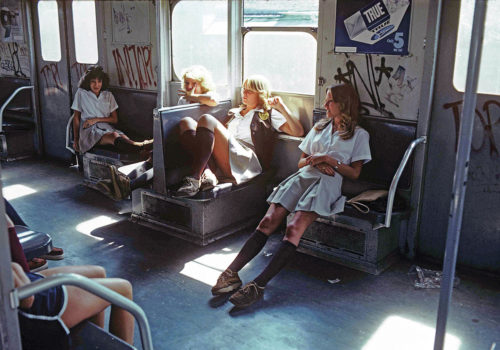 Bildhalle Amsterdam presents the first Dutch solo exhibition of Swiss photographer, Willy Spiller (*1947). Spiller‘s signature mark involves capturing images that re-tell everyday stories, using techniques of fine art and documentary photography. The series New York, 1977 – 1985 was shot in a period during which Willy Spiller lived in The Big Apple. He roamed the streets far and wide to capture a glimpse of the speed, the energy and the absurdity of the late 70s and early 80s in New York City, USA.

Whether he focused his camera on subway rides, dancers at the legendary Studio 54 or hip-hop culture in the streets of New York, Spiller captured all the many facets of a bygone world in images as varied, as fascinating and as absurd as that world itself had been.

In the process, Spiller combines his curiosity for his fellow human beings with a profound understanding of the beauty of the banal and mundane in the world around him. This secures his place in the annals of great Swiss photography.

Like many of the well-known names that came before him, he managed to translate empathy into form through strength of willpower. Or, as his long-time friend and companion Paul Nizon so aptly put it: ”I‘ve often asked myself what made Willy Spiller‘s photography so forthright, so refreshing and so riveting. I believe it‘s a blend of unabashed curiosity and roguish complexity combined with a fraternal sense of compassion. This isn‘t something you learn at school: it‘s more a question of class, of predisposition, and ultimately of character. Behind the swashbuckling, wheeler-dealing façade there‘s a dreamer, a man hungry for life and beauty. And that is the reason he sides with humanity, which is just another way of saying that he has an innate love of mankind. That is the way he sees things. And he is driven by a highly developed artistic energy.“

“Willy Spiller is one of Switzerland`s greatest living photographers. A man of his metier through and through, he has shown us that photography can often go deeper when it focuses on the surface and that great things are sometimes born from humility. Spiller is a photographer of people and their stories. His pictures decipher the human comedy: he succeeds in impressing us with the unremarkable, he sees the tragedy in the ridiculous but also the humour in the depressing and the elegance in what is essentially tasteless. Aloof but invariably respectful, unsentimental but always driven by feeling, his photographs lead us through the present, and without going into too much depth, without any grand gestures, they paint a glittering image of human achievement, passion and ambition.“