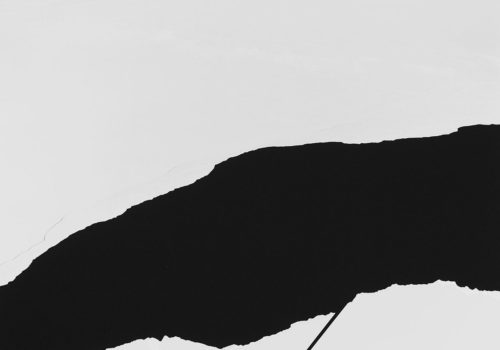 As part of its curatorial program, Bigaignon invites each year an artist who has built an outstanding series of work which deserves to be brought to light. After Irène Jonas in 2020 and Hideyuki Ishibashi the year before, the gallery’s collectors and art enthusiasts are in again for a special treat for this 2021 edition, as the gallery welcomes the work of Jean de Pomereu in this remarkable and never-before-seen exhibition entitled « Echos ».

Echos draws on Jean de Pomereu’s in-depth knowledge of Antarctica’s artistic and scientific culture. It is imbued with the idea that nothing, not even the remotest regions of the Earth, can escape what photographer Alfred Stieglitz called ‘the hand of man’, or what author Ian McEwan once described as ‘the hot breath of civilization’.

To evoke the profoundly intertwined reciprocity of human and natural processes, Jean’s work begins with a meticulous selection of images in a vast archive of aerial photographs of Antarctica taken for cartographic purposes during the Cold War. Inspired by minimalist artists such as Sol Lewitt and Vera Molnár, the French artist then adopts the grammar of geometric abstraction to draw from, transform, and supplement these images. Through incisions, tears and layering, Jean creates new topographies, echoing humanity’s transformation of terrestrial environments both directly and at a distance. Presented alongside metallic and ceramic sculptures, his re-compositions comprise three distinct elements: paper, carbon and ice. Ice is the subject, carbon is the pigment, paper is the support. In their geometry, these reflect the natural patterns and structures of ice as it forms, calves and flows in response to both natural and human forces.

While Jean’s sometimes subtle, sometimes brutal interventions are intended to echo the ‘hand of man’ and his transformations of the Earth, his poetic and conceptual dialogue with the aerial photographs that constitute his primary material, bares witness and expresses humanity’s interdependence with each and every terrestrial environment. Thierry Bigaignon comments: « Sublime in their stirring of both awe and dread, Jean de Pomereu’s echos are closer to the evocations of change and ephemerality found in vanitas paintings, than they are to political art. The outcome is an experimental project rooted in the history of art, but motivated by critical contemporary concerns that touch us all. »