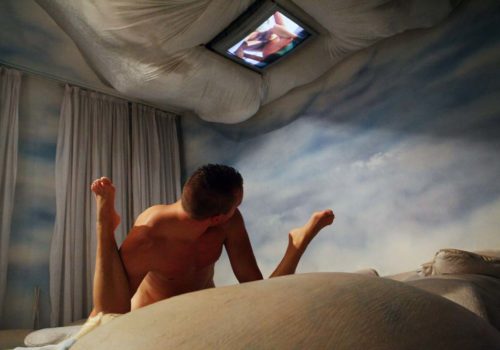 Big Sister, which profits from this visual legacy and phenomenon, is the creation of two entrepreneurs who were inspired by the popularity of “Big Brother,” the worldwide reality-TV franchise. On that show, a group of strangers agree to live together and be surveilled for months in exchange for media exposure and a chance to win a substantial cash prize. At Big Sister, the concept is similar, but the turnover is faster. Clients trade away their privacy for an hour of sex. Tens of thousands of men, most of them sex-tourists from Western Europe, pay a small entrance fee, then sign a multi-page contract that strips them of all rights to recordings of the virtually-free sex they will have onsite. The women who choose to work at Big Sister get what they believe is a good deal, too: generous salaries, additional payments for video chats or online shows, and royalties from downloads of the video clips in which they appear. Since 2007, special swingers’ and couples’ nights have been introduced to enliven the mix, and Big Sister’s visitors walk out the door with souvenir DVDs documenting their visit, an arrangement that seems to work well for all involved.

Three years ago, Hana Jakrlova, a Czech-born, New York based photographer, began documenting what goes on in front of cameras and behind the scenes at Big Sister. She quickly became fascinated by the complex mix of sexual, psychological, and cultural dynamics she witnessed, as well as by the place itself. Fifty-eight video cameras—dangling from ceilings, hidden under props, mounted on walls and at mattress-level in kitschy theme rooms—were installed to record the action. Out of sight in a well-equipped control room, technicians monitor the various rooms and activities, and call the shots, zooming in or out as needed. Female employees—conscious of where the cameras are located and knowing what online viewers hope to see—subtly position themselves and their clients to insure that the most effective images are captured.

Jakrlova’s images provide a cool and critical perspective on the “hot” activity she represents. In striking, and often remarkably beautiful photographs, given the subject matter and site, she reveals how photography and digital technology work together to shape and monetize desire and to normalize exhibitionism and voyeurism. Jakrlova’s project raises some interesting questions about what motivates people to appear in or pay for the product Big Sister manufactures. What does it mean, and who benefits, when explicit images of intimate acts are made public and go up for sale? What pleasures or power do viewers derive from watching the sexual performances of everyday people who find their way into the spotlight?

We are living in a curious cultural moment when we will proudly share sonograms of unborn children, joke about sex-tapes of public figures that get leaked to the media, and then worry about teenagers sexting suggestive images via their cell phones. Jakrlova’s work encourages us to consider exactly what it is we need or want to see. In an increasingly show-all, tell-all world where privacy is being challenged and re-defined continually, each of us needs to rethink what we will share with others, and why. In one of her most telling images, a Big Sister client, mid-thrust, turns away from his partner to check himself out in an overhead monitor. That startling photograph makes you wonder who the prostitute is, given the situation. As photography, surveillance and the Internet actively shape our fantasies, behavior and self-image, it seems as if we, too, are being conditioned to become performers. And depending upon what we will agree to reveal or do, or if we just sit back and watch, the pay-off remains to be seen.