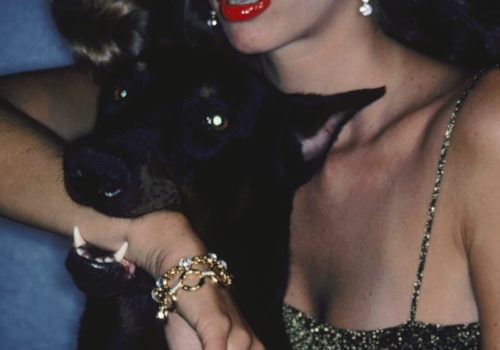 For Miami Art Week, The Selects Gallery is presenting “Glamour and Danger”, an exclusive exhibition about cult photographer Chris von Wangenheim starting December 04th 2020 for Miami art week along with a live talk with the artists that worked on set with the photographer.

In the 1970s, the photographer Chris Von Wangenheim radically challenged the public taste with high fashion photographs capturing the zeitgeist and cultural changes of the era. His images have remained largely unseen since his tragic death in 1981 and The Selects Gallery is showing the images exclusively 40 years later.

Curated to feature some of his most recurring themes such as violence, sex, glamour, and punk, the exhibition includes images shot between 1973 and 1979 which were some of the most innovative avant-garde images of the time. The exhibition is on view at https://www.theselectsgallery.com/danger and presented in an immersive way with exclusive audio interviews, videos and quotes from the creatives who worked with him as well as a new image release.

“Glamour and Danger: On Set with Chris von Wangenheim”

Founder Marie Audier D’Alessandris will moderate a discussion with makeup artist Sandy Linter and former creative director of Interview Magazine Marc Balet. These creatives worked intimately with Chris to create some of his most iconic images.

The event builds on the gallery’s work preserving the late photographers images from the archives and promoting his legacy. After Chris von Wangenheim tragically died at the age of 38 in a car crash, his groundbreaking fashion photographs were at risk of being lost despite being critical to the history of fashion photography.

Chris von Wangenheim, The inevitability of violence through Fashion Photography

Chris von Wangenheim was one of the most groundbreaking fashion photographers of the 20th century. He is best known for his provocative yet extremely attractive images such as the Dior campaigns or the shoots with seemingly aggressive Doberman dogs for Vogue magazine which are considered the most memorable fashion images of the decade. He left a profound legacy and lasting influence even if his career was cut short.

After his tragic death in 1981, his wife, Regine Jaffry, was left with a young daughter to take care of. She left the fashion industry and the photographer’s images disappeared from the public eye for 40 years. Yet his influence is passing down to the following generations in a deep and subtle way. Many photographers, editors and designers such as Steven Klein, Mario Testino or Marc Jacobs still include references to his work in their creations as a secret homage.

Four years after the publication of the seminal book Gloss: The work of Chris von Wangenheim by Mauricio and Roger Padilha and its launch party hosted by Marc Jacobs, some of Chris’ most iconic images are finally available for sale at the Selects Gallery, most of them exclusively. A new exhibition, “Glamour and Danger” and an upcoming live talk on Zoom “Glamour and Danger on set with Chris von Wangenheim” hosted by The Selects Gallery on December 15th at 6 pm EST with the creatives who worked with him, give us the opportunity to revisit Chris von Wangenheim’s work.

Christoph von Wangenheim was born in 1942 in then war-torn East Prussia, to the family of German-Polish aristocrats. His family tree includes some prominent personalities such as Gustav von Wangenheim, an actor and director, known for Nosferatu (1922), Woman in the Moon (1929) and Der Kampf (1936) an anti -nazi protest film. Chris’s father Konrad von Wangenheim was a German army Cavalry officer, a horse rider who competed at the 1936 Summer Olympics in Berlin hosted by the nazi regime, securing a gold medal for the German equestrian team despite suffering from a broken collarbone. Chris never met his father who died in Soviet captivity in 1953 but his life circumstances seem to have deeply influenced his son’s work.

As a mirror of his early years, Chris von Wangenheim’s work challenged society and daringly captured its darkest and unpalatable aspects. His family history, exposure to Nazism and experience of New York City’s violence, where he moved at 23 might have contributed to his use of photography as a medium to show the world’s darkness as an inevitable reality, beyond appearances.

The tumultuous era of the ’70s in New York influences some of Chris von Wangenheim’s most daring work. At that time, the US was facing a significant economic crisis, and New York City was close to bankruptcy. New Yorkers suffered from a high crime rate and extreme poverty. Drugs, muggings and even murders were part of their daily life. New Yorkers had also to reckon with radical cultural changes brought on by the feminist movement, the sexual revolution, and the public destigmatization of pornography.

This turbulent and violent society found its way into all sort of artistic creations, including fashion photography. Counterculture affected Fashion, and fashion photography evolved from pleasing and elegant images to shocking and thrilling ones. Editorial pages of Fashion magazines featured provocative, morbid, and decadent images as a cultural exploration led by “the terrible three”:Helmut Newton, Guy Bourdin, and Chris von Wangenheim.

Chris used many of the same symbolistic themes and motifs as his peers. The outtake from Vogue shot in 1977 explores criminality and includes a few messages “resisting arrest” as a charge and “H Newton” as an officer. Photographer Helmut Newton and his wife June were dear friends of the Wangenheims. Helmut Newton once said, “My wife and I were very fond of him. He used to hang around with us a lot when he was in Europe. He was something of a German wunderkind and I was proud to have a small influence on his work. We spent a lot of time laughing together.”

Yet his ultra-realistic approach set him apart from any other fashion photographer.

Bourdin and Newton depicted the violent act in a suggestive manner, allowing the viewer to distance themselves from the horror scene emotionally. Newton has often been attributed to borrowing from the world of dominance and kink, Bourdin from the universe of suspense and surrealism. They both anchored their cinematic scenes in the world of imagination and provided some context and reference points for the viewer.

Quite the opposite for Wangenheim depicted instead the act as it was occurring. From car fires to bites from a ferocious Doberman, Chris did not provide any escape to the viewer in his portrayal of society’s issues. He appeared to be determined to shock through explicit and stark compositions of physical violence that place viewers within the immediate moment of danger. What seems like fantasy becomes grounded in reality through these discernable instances of raw violence.

As Vera Wang shared, “Chris was one of those photographers; he was very into creating and controlling a scenario. To him nothing was taboo, and he loved to explore the tensions between good and evil, between beauty and horror  it’s a sadomasochistic picture and one that was very much in tune with the times It was a very exciting time to be young in New York if you were lucky enough to live to tell about it”.

Much of his work has a double meaning to shock and shake up the world beyond Fashion imagery.

From 1974 to 1977, Chris von Wangenheim created one of the most talked-about fashion ads campaigns of the decade for Dior, reflecting the contradictions of the time in this series called “Fetching is your Dior”.

With this campaign, Wangenheim is responsible for one the most memorable fashion image of the decade. It pictured a very audacious Lisa Taylor, one of the most celebrated models of that time, looking directly into the camera, with strikingly dramatic makeup, her delicate jeweled hand clenched by the jaws of a Doberman. Some could see a sign of the fearlessness of the times, or a message on the omnipresence of violence at every layer of society.

“Von Wangenheim used fashion photography as a medium, but injected commentary on issues such as violence, sexuality, women’s liberation, homosexuality, and voyeurism, all of which were hot topics during his era.” Roger Padilha, one of the book’s co-authors said.

By creating an explosive mix of violence caught in the moment and highly polished scenes, he played extremely well on the sharp contrasts of the times. He also seemed to demonstrate the inescapability of violence.

In his juxtaposition of extreme glamour and violence, the work of Chris von Wangenheim aligns itself with the “Film Noir” movement in cinema and the “Sublime” one in Art. Similarly to Film Noir, the dark and macabre in his imagery were an integral part of the aesthetic. He succeeded in building an illusionary but very convincing world of fragile but dangerously attractive glamour.

Chris von Wangenheim fashioned images that were highly seductive and captivating, and took control by borrowing from the femme fatale codes of Film Noir, with ultra-feminine, assertive and chic women. He pointed out the contradiction of the rich society’s elegance and decadence.

He also played with society’s deepest fears and desires. His images got hold of the viewer and cause a moment of suspended shock and awe as the realization was forming in their mind that what was shown was closer to reality than previously imagined.

His striking photographs seem to be overwhelming the viewer in pleasurable terror– a key theme of the Sublime. Found throughout rhetoric, philosophy and art, the concept of Sublime has evolved with the times and has being consistently described as inspiring awe and veneration, uncommonness, immensity, turbulence and our human response to it.

Wangenheim mixed pleasure and repulsion to stop the viewer in their tracks. He was creating confusion in his audience’s mind so that they couldn’t but observe the inevitability of the violence in our society and the complexity of human emotions towards it, as an inexorable fate.