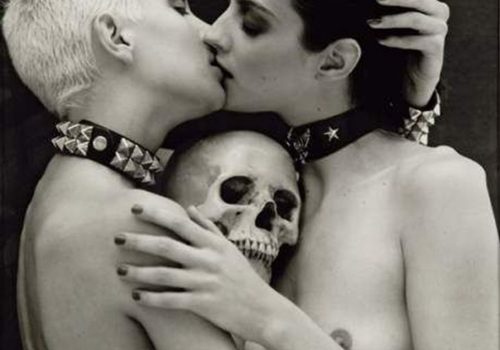 Through the act of collecting, works of art change from their “object status” and become charged with symbolic and emotional value; this mutation or “re-creation” is independent of their nature and is instead closely linked to the ego of the collector who buys them.

Collecting is my way of making art, which means envisioning and creating an artwork “in its own right”, which materializes through the artwork of others.

The Collection develops and forms over an extended lapse of time, under the influence of psycho-aesthetic changes and/or evolutions of the collector.

This evolution of the collector’s identity represents the backbone and “nervous system” of my collection.

The hic et nunc of the collection can thus be interpreted as an open system, the final moment of a process, or as the initial moment of a new evolutionary phase; to say it with Aby Warburg, the parts of a collection are like ghosts, always half-alive, suspended, always in play, always returning, perpetually floating.

Collecting is, in the end, a particular way of choosing, approaching, conjoining parts of oneself, tying up temporal dimensions and through multiplication of the process of the narcissistic projection itself.

The instinct and desire to own a work of art goes hand in hand with an underlying conscious or unconscious drive; a drive which includes atmospheres, feelings, melancholies, euphorias, depressions.

As of the 1980s,image has devoured reality and, similarly, a collection of any typology has become a true simulacrum of the collector and a reflective mirror of the various moments of his existence.

An art collection is a writing composed of objects and therefore a “hieroglyphic essay”; the objects collected have a life that ends with synchronizing, with regulating oneself as a whole, with their being collected, reunited and concentrated, and this life winds up becoming inseparable, indistinguishable from that of their collector, and becomes his very extension.

This is the extraordinary “therapeutic” function of art, as the collector represents himself unfiltered through his collection and thus truly recognizes himself in it.

According to Walter Benjamin, “Possession is the deepest relationship ever with things. Not as if things were living in the collector, rather it is he who lives in them”.

The Concept of the Collection

Collection Ettore Molinario aims to explore the theme of Gender Identity through the complete history of photography, documenting the aesthetic representation of five states and constitutive processes of personal and sexual identity.

Eros & Thanatos are the polarity between life and death and define identity as a tension between creation and (self)destruction, self-affirmation and self-negation.

The latent dissatisfaction in everyday life, that is, the lack of satisfaction of the drives of life and death to which “civilization” binds us, leads to a sublimation, to a process through which we transfer to another object the drive for something which escapes us.

Collecting is therefore, in my case, a sublimation of drives. Taking them outside, externalizing through “mirror” images one’s own impulses, means obtaining a certain detachment from these drives, exorcising neuroses, releasing tensions.

Neutral Identity results from pausing or not participating in the conflict between female and male identity. It is a condition of neutrality and fluidity that sets itself apart from gender dualism.

The actuality of the theme lies right in front of our eyes; the main fashion houses are represented today by transgender models and faces and promote collections where “cross dressing” is the new frontier of cutting-edge fashion.

Social and sexual taboos, once considered as insurmountable, are demolished with an unprecedented naturalness and effervescence.

Fetishism influences the construction of identity through processes of replacement and shifting, which concentrate on a surrogate of one’s object of desire.

The new frontiers of the sexual sphere are characterized by virtual and hyper-realistic processes where the surrogate takes on the value of reality and where reality and fiction are characterized as the prevailing background scenarios. The possession of the work of art represents an example of fetish tool used to produce sexual excitement. Latex and all similar adornments are once again highlighted in the world of fashion, as evidence of the current situation of identity simulacrum.

Melancholy, an introverted feeling according to the ancient doctrine of the humours, betrays the lack of something that is identified with a part of the self, something that is believed to have been found yet that has been lost again.

In the current “sentiment of a globalized world”, loneliness and isolation prevail in an absolute countertrend if compared to the appearance of a society which is virtually and economically integrated.

This discrepancy between simulacrum and daily reality, where values are the pretext to attract consensus and crowds but devoid of real consistency, where the intrinsic human ability to project gives way to a carpe diem and a chronic uncertainty in living, leads us inevitably towards a regression into a melancholic social identity.

Uncanny is disturbing and reassuring altogether, it makes one alert yet increases one’s self-awareness, allowing what was hidden and buried to re-emerge.

Today’s society is strongly uncanny, shaken to the roots of our values, our social behaviors, in a spiraling whirlwind towards the unknown.

The world’s virtual acceleration, from the competitive economy to geo-politics, from communication to commercial exchange, the planet’s increasingly precarious conditions, combined with a collapse of human values and skills on a global level, can only disturb the world’s sentiment and undermine the concept of social progress.

The “coronavirus” can be considered as the disruptive synthesis of uncanny effects on our planet, a powerful agent of change which, in spite of all of our planet’s knowledge, will revolutionize, starting from our mistreated natural world, all of our fragile daily habits. The return to an awareness of our global psycho-physical vulnerability, bringing us back to a “slower” but perhaps more human lifestyle, will be the spark to reflect on the contradictions of this uncontrolled globalization.

An intertwinement of masks

In the process of identification, the basis of my personal collecting “circuit”, the theme of the mask, understood as the different representations of facets of my own self, plays a profound, libidinal but also disconcerting role.

The collected image is the artist’s mask, a phantasmatic projection of his sensitivity, ego, joys, secrets, torments, and life.

The collector, who impacts with this artistic projection, triggers in turn an identification process with the mask represented consciously or unconsciously by the artist; the identification is transmuted into a force which generates acquisition or, more precisely, possession.

Yet it is evident that the “part” of the collector who identifies with the image is in turn one of the many masks “worn” by the collector, generating a dialogue between “simulacra” which appear as real.

Masks towards masks that intertwine themselves in an aesthetic dialogue, circumscribed within this symbolic and totalizing relationship between the artist and the collector, through the “target” image.

The mystery and enigma of collecting lies, in my opinion, in this bi-univocal relationship between masks, in the fateful moment in which masks attract each other and decide to crystallize this relationship, through mutual possession.

It is only natural therefore for the image, as an “autonomous entity” in the sense of an object which is part of history, to reduce its intrinsic meaning, as it is continually “re-created” by the masked contribution of its users, carriers of both contemporaneity and memory of the past.

Acquiring and therefore possessing are, in my case, fueled by this living relationship between masks, this third dimension which sublimates the formal and aesthetic recognition which historical criticism can attribute to the work of art.