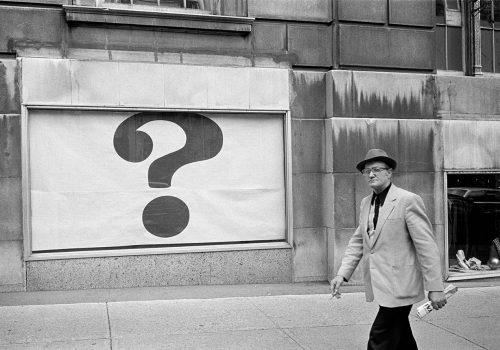 For this exhibition, Bertrand Carrière has made a selection of images taken from eight photographic corpora from the 1990s to today, inviting us to a compendium of revealing moments that have marked his creative and life journey. The exhibition brings together the two orientations that characterize its production – one, resulting from daily practice supported by an intimate, even autobiographical approach (Les Images-Temps, Signes de jour, Le Capteur); the other, appealing to the memory of places marked by history, from a documentary perspective (Dieppe/Caux, Après Strand, Miroirs acoustiques).

For nearly forty years, Bertrand Carrière’s work has intensified over time, making temporality a fundamental paradigm of his approach. His nomadic and impulsive shots guided by the availability of an alert gaze have constituted a colossal repertoire of personal images with recurring and allusive motifs. Portraits of family, friends or strangers, landscapes of proximity or captured during his wandering, in private and public spaces make up an iconographic lexicon that fits into the framework of an evolving story. His work thus explores the discursive power of photography, forcing associative links and fortuitous and intuitive encounters.

Narrative time in Bertrand Carrière’s work most often scrolls through sequential shots, attesting to the long-standing complicity he has maintained between photography and cinema, involving his experiences on fixity and movement and their impact on the rendering and the course of events. Here, between light and shadow, signs of life and mourning, vestiges and reminiscences, presence and invisibility, a whole formal device is implemented in order to orient us towards the shifting paths of memory and History.

This art book offers texts that discuss the considerable work of photographer Bertrand Carrière and in which there is a very large collection of photographs. The artist has made several trips, both in Quebec and in Europe, and he has made a large number of documentary photos. His family albums or traveller’s tours, whether in Gaspésie, Ireland or Dieppe, bear witness to a keen eye on the 20th century. The artist’s photographs, both personal and universal, convey to us a sense of history tinged with great humanism. The texts published in this book highlight how the photographer stands out. The artist himself signs one of the texts, in which he makes us relive with humor and sensitivity his many journeys.

Bertrand Carrière’s work has been exhibited in Quebec, Canada, the United States, Europe, Russia and China. Recently he exhibited in Glasgow the images of his residence in Scotland. He received the Conseil des arts et des lettres du Québec prize for creation in the region (Montérégie, 2005) and the Desjardins Reconnaissance prize from the Conseil des arts de Longueuil (2018). He was in artist-in-residence at the Studio du Québec in London in 2019.

He has published several books. Let us note Dieppe, landscapes and installations (400 coups, 2004) and more recently The Sensor (Éditions du Renard, 2015). In 2020, Solstice (Plein-Sud editions and Galerie Antoine Sirois) is published, a monograph that takes a look at its 40 years of production. His works can be found in several collections, including the Musée des Beaux-Arts du Canada, the Musée national des Beaux-Arts du Québec, the Canadian Center for Architecture, the Houston Museum of Fine Arts, the National Library of France, the Cinémathèque Québécoise, Cirque du Soleil and the McCord Museum.