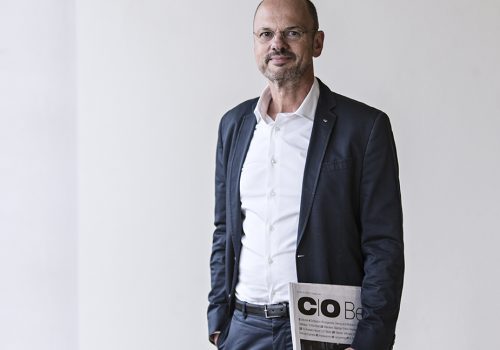 Berlin’s multifaceted art scene is world renowned, far beyond its borders. Within this large community of galleries, museums, collections, institutions, project spaces, and studios lies the photography scene as an entity in itself.

Being asked to introduce Berlin’s most interesting representatives of the photography scene was a challenge on its own, as any selection can only be subjective and subject to preferences, experience, and fields of interest. So I am delighted to share now the first part of my “Berlin Photo Scene” – to be continued at the end of this month. – Nadine Dinter

ANTON CORBIJN Retrospective at C/O Berlin Amerika Haus with more than 80,000 visitors in 2015

Never solve your problems by excuses.

Outstanding is our photo cluster at the train station Zoo in Charlottenburg: C/O Berlin cooperates with the HELMUT NEWTON FOUNDATION and the MUSEUM FOR PHOTOGRAPHY.

Your 3 favorite shows / projects to date:

Your most successful exhibition:

15 February – 7 March 2020, with works by Birgit Kleber, Volker Schlöndorff, Donata Wenders, and others

Travel with an open heart!

NYC, Berlin, and Moscow are definitely my best-known photo projects, but my favorite more recent projects are probably my photos from L.A., Romania, and Istanbul.

Probably my solo exhibition at the Deichtorhallen in Hamburg; my cooperation with the Bene Taschen Gallery in Cologne, Los Angeles, London, Paris, and Berlin; my participation at the El Salvaje Europeo exhibitions in Barcelona and Valencia with the likes of Paul Klee, Picasso, Albrecht Dürer, Lucas Kranach, and Goya; and the Darkside I and Darkside II exhibitions in Winterthur featuring many of the greatest photographers in the world. As for my published works, my cooperation with Gestalten (Radical Eye), Pogo Books (NYC RIP, Down And Out in Moscow, Berlin Noir) and Spector Books (Ukrainian Night).

I’m currently working on a photo project about Istanbul. Pogo Books is publishing my next photo book, Romania Raw, which should be printed in March. I have a solo exhibition in March/April at the Museum of Art in Cluj Napoca and another solo exhibition in May/June at the International Center of Photography in Palermo. And two group shows at the Museum of Photography in Berlin and in Konstanz.

I don’t know if I have a motto. Maybe “Don’t sensor yourself.”

That’s a tough question since I’m not really involved with any scene. Jens Pepper tried to establish something with his photo chats which was quite interesting. I have seen some good exhibitions at C/O Berlin and Martin Gropius Bau, but I still have to visit the Helmut Newton Foundation and the Museum of Photography Berlin. There are a couple of good photo book stores like Bildband, and several photo galleries I have been exhibited in since 1981, and I know a couple of good photographers, like Jackie Beier.

This is difficult to answer, as there are considerably more than three projects that I have worked on with great pleasure in my career so far. For last year, I can try to limit it to three major projects. For example, we produced several works for different photographers during Berlin Photo Week. They included Evelyn Bencicova, Thomas Kretschmann, Olaf Heine and his “Rwandan Daughters”, Thomas Höpker, and Justine Läufer. Then there was a project with Kirchner Museum Davos, for which we developed a multitouch table. We produced Thomas Billhardt’s works for various exhibitions, where we also handled digitization and image editing. We produced a work by Moritz Wegwerth as a large-format spliced inkjet print, as a product prototype for us, which is currently on view at the Philara Collection in Düsseldorf. There were many other projects with both long-standing clients and new artists. I have no preference here, but I really like the variety of projects.

We have recurring projects that we enjoy working on and look forward to again and again. This includes working with GRISEBACH auction house, for which we regularly create scans of originals for their auction catalogues. We have also been cooperating with EPSON and UNICEF for several years for their Photo of the Year Award. We regularly work together with CAMERA WORK gallery and TEXTE ZUR KUNST. These connections, some of which are many years standing, are proof of the success of the work we do.

We are looking forward to a promising year in which existing projects and cooperations will be continued – also in the field of research on photography – but which also offers cooperations that we are not allowed to mention, at least not yet.

I thought about that for quite a long time and then I realized that I do not have one.

That we are in the very middle of it.

I don’t have a motto/credo. But I like this Brazilian saying: “Quem parte leva saudade” – “He who says goodbye takes longing with him.” I like that word Saudade. You can’t really translate it. It describes a deep emotional state: A touch of melancholy. A turning towards the past or towards the future. A yearning for happiness that has passed, or perhaps never even existed.

The variety I guess….?