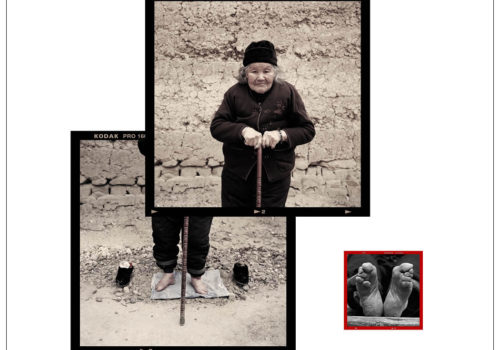 The definition of a beautiful woman has always been a topic of discussion with varied answers primarily due to culturally specific tastes. Women in the Ndebele tribe in Africa and the Kayan tribe in Burma celebrate elongated necks decorated in striated metal rings as a form of beauty. Whitening skin creams are very popular in Asia. And yet sun-bronzed women are considered healthy and beautiful among westerners.

Li Hu explores a traditional characteristic of beauty exercised as far back as the Tang Dynasty, 618 – 904. It is estimated that around 2 billion Chinese women had bound feet from the 10th century to 1949 when foot binding was outlawed by the Communist regime.

How did End, Bound Feet come about?

In the countryside of Henan Province, the fire ceremony (a New Year’s ceremony) is celebrated in the temple, where people gather to bless the gods. In 2007, I explored this tradition by documenting 14 different fire ceremonies in this area. During the shooting process, I ran into some elderly women with bound feet.

I was surprised that women with bound feet still existed and started documenting them in 2008 by creating 3 separate images encasing their portrait. Bound feet women were physically handicapped from their deformed feet, and they weren’t able to perform everyday activities. And so the 3 squares resembled the broken nature of their bodies, providing 3 analytical perspectives.

Twenty bound feet women, 84-104 years old, were photographed in their hometown of Lushan, Henan Province. Lushan County is embedded deep in the rural mountain area, so deep that all 4 tires of my car were flattened trying to reach them. It was not an easy trek. All of the subjects were recommended word of mouth. One recommended woman I had tried to photograph recently passed after arriving at her home. I felt fortunate to find these amazing women as they are important to China’s history and are passing away.

What did you discover shooting the images of these women?

One thing I noticed was there was a correlation with the size of the foot and the age of the woman. Older women had smaller feet, and younger women had bigger feet. The 84-year old woman who was the youngest in the group, whose feet were bound at the age of 3 and then released when society discontinued the tradition gradually in the early 20th century, had larger feet than the older women. When her feet were unbound, there was a little bit of discernable growth in her feet.

Which woman impressed you the most?

Some women couldn’t securely stand on their own feet, and those women usually had a group of younger individuals who helped and protected them. My favorite portrait was of Xuizhen Li, who was blind in one eye and couldn’t stand on her own. She was very kind, optimistic and graceful and had a big family with many grandchildren. She’s happy with her life and continues to work as much as she can for her family, which includes work in the fields. The motherly nature she had and the sacrifice she made for her family could easily be felt. She lived through many hardships including the war. I admired her.

Can you tell us about the history of bound feet?

We can learn from history books that women bound their feet as early as the Tang Dynasty, over 1 thousand years ago. Bound feet were considered beautiful, an aphrodisiac. It was also another way for men to control their women as they were home bound and could not travel far. It was understood by others that because they couldn’t work in a normal way, their desire for sex increased. And walking the way they did with their bound feet was supposed to also sexually stimulate the woman.

Many upper class families in the past didn’t allow their bound feet daughters to leave the house. They stayed upstairs in their room and weren’t even allowed to greet their guests.

Why did you decide to cover this topic?

I wanted to show the viewers the incredibly rich life these women led despite all odds. They suffered a lot from the tradition, which wasn’t the healthiest. Most bound feet women weren’t treated fairly by their communities growing up. This project encases this history and also criticizes this tradition.

I also felt it was important to document some of the last generation of bound feet women as they are dying off and disappearing.

Can you describe your future project?

The next series I’m making documents people living in cave houses. There are 6 provinces by the Yellow River that have communities that live in cave houses made of mud where the houses are dug through hills from the top and side or are fabricated.