Barbara Mensch – In the Shadow Of Genius 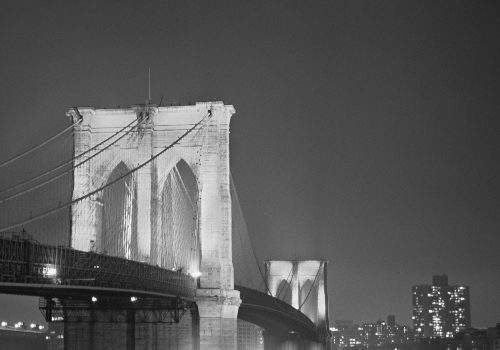 In the Shadow Of Genius is the newest book by photographer and author Barbara Mensch. Mensch combines her striking photographs with a powerful first-person narrative. She takes the reader on a unique journey from recalling her experiences living alongside the Brooklyn Bridge and then traces her quest to understand the brilliant minds and remarkable lives of those who built it: John, Washington and Emily Roebling.

The book begins and ends with Mensch’s unique photographs of the Brooklyn Bridge. She also presents for the first time, a comprehensive collection of images taken deep within the superstructure as well as photographs inspired by the study of drawings and other fascinating documents from the Roebling Archive. Following in the family footsteps, Mensch traveled to Mulhausen, Germany, where John Roebling was born in 1806; to Saxonburg, Pennsylvania, where he founded a new community in 1831. Mensch followed John Roebling, the principal designer of the Brooklyn Bridge, on a creative journey to the aqueducts and bridges that he built in Pennsylvania, New York , Ohio and Kentucky, where, in the process, he changed the face of American technology.

Mensch also retraces the steps of Washington Roebling,( John Roebling’s first born son who in just a few years in a twist of fate, was to build the Brooklyn Bridge in place of his father) to the Civil War battlefield in Gettysburg, Pennsylvania, where the young military engineer valiantly served. The work is accompanied by a narrative which brings a new element and perspective to the story. The reader follows Mensch as she uncovers primary source material from the pens of John, Washington and Emily Roebling. Mensch brings together riveting passages from their personal letters, some of which were either missing from the public record for decades or given little attention in public dialogue, all of which will highlight those human character traits which drove them to endure decades of struggle…..accomplishments which suggest the curious nature of genius. This is the basic premise of the book.

Fernanda Perrone, Curator of Special Collections and the Roebling Family Archive at Rutgers University, has contributed a foreword, and the manuscript was edited by Bonnie Yochelson, a dear friend and art historian who has published books on Berenice Abbott, Alfred Stieglitz and Jacob Riis.

Mensch is a contemporary photographer who probes her subject matter with the curiosity and stamina of a detective. Her widely regarded images have been the subject of numerous articles in numerous publications, including the New York Times, the Wall Street Journal, the New York Observer, Time Out. She has published two books on New York’s legendary Fulton Market, now demolished, which she photographed under the scrutinizing eyes of federal law enforcement and the organized crime community. Together, South Street ( 2007) and The Last Waterfront (1985) have sold close to 10,000 copies. Her work is represented by museums and collectors, and important library collections, including the Museum of Modern Art, the Museum of the City of New York, the Bibliotheque Nationale, Agnes Gund and Sir Elton John.

Barbara Mensch – In the Shadow of Genius

The Brooklyn Bridge and its Creators