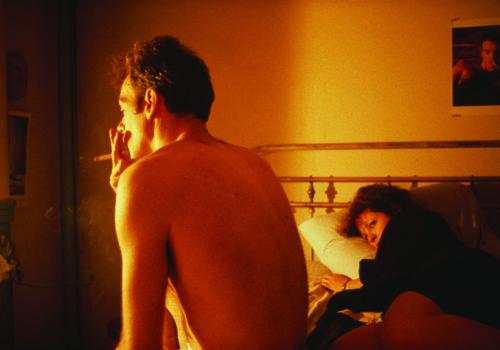 Collective work, Love Songs – Photographies de l’intime, published by Atelier EXB and which accompanies the exhibition presented at the MEP, questions the role of photography in the understanding and representation of love, physical closeness, sexuality and therefore intimacy. It brings together 16 of the most important series in the history of photography, including Sentimental Journey by Nobuyoshi Araki, The Ballad of Sexual Dependency by Nan Goldin, and Tulsa by Larry Clark.

Published on the occasion of the exhibition at the MEP, the book Love Songs – Photographies de l’intime offers a new look at the history of photography through the prism of romantic relationships. It presents a questioning of the photographic act in the amorous circle of artists, exalting the intimacy and the inexplicable complexity of love. Between art and documentary, this mythical work depicts the depth of relationships between the artist and his/her entourage, of these non-events that make up their daily lives and weave a narrative framework. Constructed like the two sides of a record, Love Songs brings together the work of 16 artists who have placed their own intimacy at the center of their photographic creation. Among the major photographic series are the set of Nobuyoshi Araki, Sentimental Journey (1969) and Winter Journey (1989-1990), which presents the beginning and the end of the relationship with his wife Yoko, from their honeymoon until her death; as well as Nan Goldin’s masterpiece, The Ballad of Sexual Dependency (since 1983), an exploratory and intimate stroll through the New York underground of the time. Several generations of photographers are thus compared to expose the diversity of forms of love in their forms but also in their meanings. Covering a period from 1950 to 2021, the book brings together iconic series and images never published in France. The international and established scene, represented by René Groebli, Emmet Gowin, Sally Mann, Larry Clark or even Hervé Guibert, rubs shoulders with contemporary creation such as JH Engström and Margot Wallard, Collier Schorr, Leigh Ledare or Lin Zhipeng. These different sets place the viewer at the heart of the action, as a witness, closer to the life and emotions of their author. Love Songs shows the very special relationship that photography maintains with reality and this indescribable thing that is love. The director of the MEP, Simon Baker, signs the preface of the book.

What is the basic idea of ​​this Love Songs exhibition?
There are two starting points. First, an observation by Nan Goldin, when we showed, at the Tate Modern (Simon Baker was, until 2019, the director of the photography department), her “Ballad of sexual dependency” in the context of an exhibition, Exposed, on voyeurism. She told me that it was impossible to be the voyeur of her own life. I found it very interesting, especially since for the public, the position is not the same. Then when I started getting interested in Japanese photography, I was struck by Sentimental Journey by Araki and wondered what the history of photography would look like through the lens of love, in terms of the representation of intimacy or, more broadly, of the relationship one has with another, whether one is a woman or a man. With this central opposition: photography is indeed supposed to be objective, while love is something very subjective.

The title, Love Songs, is related to the music. Why did you choose this reference?
We all made, when we were young, a playlist for the one we were in love with, often, the lyrics of these songs speak for us and can express our own feelings. So I had the idea of ​​listing these photographic series as compilations. Given that the MEP is installed on two exhibition levels, we have chosen to have a side A – 1950-2000 -, on the first floor, and a side B – 2000 to today – on the second. The construction of a compilation, ultimately, as for a book, is a question of rhythm.
In the catalog, I wrote an introductory text in which I wonder, at least at the beginning, what it is like to be in love. As it is an infinite subject and we all have different points of view, it is the same for the selection of artists, we had to play on the diversity of photographic approaches. How do you capture intimacy, whether radical, as with René Groebli and Larry Clark, for example, or more contemplative, as with Sally Mann or Hervé Guibert.

How do you hang intimacy on the picture rails of a museum?
Fortunately, the MEP, as its name suggests, is a home. Our rooms ultimately resemble bedrooms, so it’s ideal for allowing the public to experience intimacy, paying attention to the small details of a photo, the fragments of a body, for example, which ask in both cases special attention. And this, we can feel it more easily when we are in a room in which we do not feel crushed.

What was the guideline for designing the catalog with the EXB workshop?
I thought of a book which had to be above all joyful, which could remind me of a record cover by the Carpenters or Barry White, in the seventies, that is to say sentimental and romantic at the same time. The graphics are a success, with a somewhat old-fashioned typeface, which fits perfectly with this intimate proposal that I wanted to make, both for the book and the exhibition.