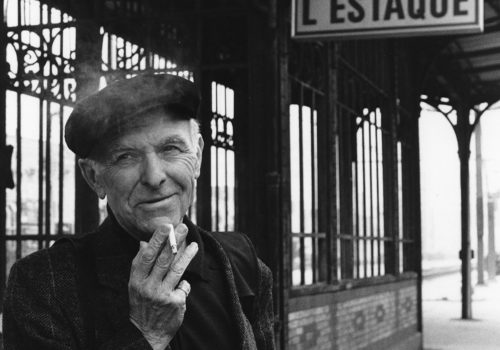 Serge Assier: he is one of the last mythical figures of Mediterranean photography.
Often ignored, sometimes mistreated like last year by a few ignorant town hall employees who wanted to throw away his archives, which fortunately the State and Heritage have recovered. Aware of the passage of time and always in search of a more than deserved recognition, this year he rented a place to show his images in Arles from July 1st to August 25th.
Here they are !
JJN

In life, you have to know how to take risks and that is what I have always tried to do.
As a free man, and I’m not someone who gives up even at 76. After the insults of the town hall whose services threw my picture rails and display cases. They soaked water in 2020 following a flood in the storage building. Nobody told me and the MdVA (the Home for associated life)  kicked me out, because I couldn’t afford to clear the space fast enough last year.
We artists, the diehards, we create wonders, with these bubbles of life that simmer in our blood through the body of the poet, in the corridor of our lives, beauty still exists through our freedom. It is the tree and its leaves, sources of plenitude in the morning fog of our lives, which give this creative force and allow us to forget the annoyances.
Here, I will be present in Arles despite everything this year (see poster). Rental fee for a space €2000 in July, then another €2000 in August, plus a small installation of picture rails and lighting.
Only happiness. As a friend Serge
Marseilles, Tuesday May 3, 2022

No one is a prophet in his city, his country.

Born in Oppède-le-Vieux, in the Luberon, I created, from Marseille, my adopted city, a universal work of art in correspondence with the texts of my poet and writer friends.

No institution was interested in my work as an author and everything was done with my personal money. The Marseilles or national museums gave me no support, because I am not part of the intelligentsia.

I am a free man. In 1984, thanks to their friendship, Edmonde Charles Roux and her husband Gaston Defferre did me the honor of giving me the Salle Allende at the Vieille Charité. Edmonde Charles Roux has written several texts on my photographic work, in particular on “La Corse Buissonnière” and “Good Mistral”, the Goudes district, as well as very beautiful articles.

I financed all of my 32 exhibitions as well as the works that accompanied them. My job as a photojournalist allowed me to make a living from photography and at the same time gave me the freedom to produce an author’s photograph.

Today, almost 76 years old, I have just decided to make a donation to the MAP (Médiathèque de l’Architecture et du Patrimoine), to save this unique photographic and literary work. I thank its managers for accepting it, it is a great happiness for me and all my friends mentioned above, a beautiful trace of life which, I hope, will continue to exist after my departure to join my deceased poet friends. .

Serge Assier, owner of a set of photographic archives produced by himself between the years 1970 and 2022, therefore wishes to donate them to the State, to be kept at the Médiathèque de l’Architecture et du Patrimoine (MAP).

This donation consists of a set of black and white negatives on flexible support 24×36, 6×6, 9×12, color positives and negatives, contact sheets, work prints referencing them and a set of exhibition prints associated with manuscripts by writers such as René Char, Michel Butor, Fernando Arrabal, Jean Roudaut, Philippe Jaccottet and many others mentioned above, as well as all the correspondence with these authors with whom I have collaborated. Attached to this, the archives relating to my career, as well as a set of proof of publication of these images.

A page turns on my life, without resentment, despite the lack of support from cultural institutions. Perhaps was I too free.

But with MAP a new life begins for my photographic and literary works.

The Pure Talent of Serge Assier

Rest assured: Serge Assier is not a cursed poet-photographer. It’s quite the opposite. Since 2022 all of his work has been placed under the protective wing of the Media Library of Architecture and Heritage (MAP), a fine institution in the Paris region. Thus his work as a multi-card photographer (especially press) has found a place of perpetuation for eternity plus a day. “Leaving a trace” has always been my friend Serge’s obsession. He is reassured. The track has now turned into a well-ploughed furrow. In addition to his images, the letters, poems and quatrains that marked and enriched his life as an artist will be preserved. So many originals signed Michel Butor, Fernando Arrabal, Bernard Noël, Jean Roudaut, David Douglas Duncan, André Villers, Jacques Henri Lartigue, Robert Doisneau and a myriad of other names who fell under the spell of the uncompromising man, the free man who knew how to resist all the traps of recovery set by the politicians, those who are on the lookout for prestigious signatures. It was not always easy, but the title of free man, without compromise, the man considered dangerous because he was uncontrollable, is a title that has to be earned over time and throughout his thirty-six years of presence in Arles. When you are in a permanent quest for beauty, light and poetry, no headwind can interfere with the march of time. Alas, the unthinkable happened: the bureaucrats of the Maison de la vie associative and the services of the town hall joined forces to, on the pretext of flooding in a storage room, send the picture rails and display cases to the garbage dump without another form of trial. But our friend Serge is not a man to give up. To perpetuate his presence and honor the annual meeting of his friends scattered around the world, he has rented premises at his own expenses and will continue to publish his thousands small posters announcing his presence. A small place and reduced exposure. But before his archives flew to other skies, the artist selected from his thousands of images the quintessence of his life’s work under the title “Poetry, Love, Photojournalism”. With the red thread of meetings and friendship without shadow with René Char, whose tutelary shadow will hover over this meeting. Could there be a better snub to those who thought they were getting rid of a workaholic? Artistic nudes, portraits filled with humanity, images from an Yves Montand show and news items as if it were raining. Once again thank you René Char for giving the faith and the strength to continue and offer the public this new festival of pure talent.

Between Croisière and the School of Photography opposite Luma