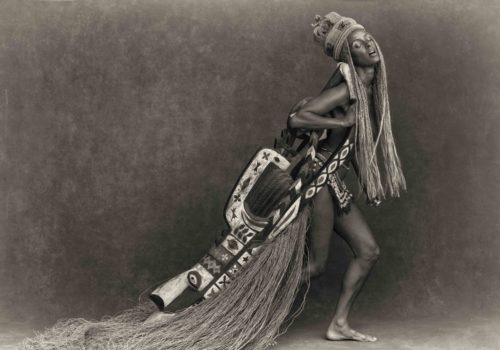 On the occasion of the Rencontres d’Arles, the Fisheye gallery presents Delphine Diallo’s new series, Golden Age, produced in collaboration with WhiteWall. Mixing photographs and collages, the exhibition is an invitation into the universe of this protean artist.

The Golden Age series originated with a proposal: the wish of a great lover of African art to create a work from his own collection. Among the 3,000 artifacts that make up the collection, the photographer chose to work with ritual masks, traditionally worn by men, which she reappropriated through powerful self-portraits, allowing her to “tell [her] story as a woman.

Diallo also invites three women to create a new spiritual connection with these objects, “three black women representing three physical beauties of the African continent – Soleïta the Congolese, Oyte the Eritrean, and Johanna the Nigerian. Becoming queens or goddesses, they are immortalized with large format portraits, printed by the German firm WhiteWall on matte paper, whose black and white with sepia tones allows this “transmutation of the divine” to be inscribed in history.

By reappropriating these masks reserved for men, the artist begins a rewriting of the history of African spirituality, whose heart is now female. A spiritual reconnection all the more essential as these artifacts, torn from their source, had lost their divine identity. A new breath of life and immortality is injected here “through the bodies of African women – themselves divine.” With this feminist, spiritual and post-colonialist approach, Delphine Diallo joins the approach of Samuel Fosso or Zanele Muholi, photographers who, like her, are part of an emerging movement in art history aimed at refocusing the place of African art.

Alongside these portraits, the photographer presents a series of new collages, large formats that blend her “earthly adventures with the interior of [her] psyche.” It was essential for Delphine Diallo to show these works, which constitute for her the long research work from which her photographs are derived.

The striking breadth of her universe unfolds before our eyes through each of the images forming the collages: the female body; divinities – African but also those that Delphine Diallo has met around the world; memento mori; fauna and flora; the connection to nature, source of life and creation; shells, whose geometry reflects for her the shape of the cosmos.

These images are strewn with references to the history of Western art, which are echoed from one collage to another and which Delphine Diallo diverts. In particular, she revisits Muybridge’s famous decompositions of movement by invoking the figure of the warrior woman. This protector of the gods is one of the many forgotten archetypes that she intends to revive to remind women where they come from.

The photographer frees this warrior woman from the frame imposed by each image of the Muybridge friezes: “I made sure that the body enters each time in the other image. For me, this is the opposite of the patriarchal perception where each person is assigned to a box, from which it is impossible to get out.” Again, the female body is a vector of emancipation.

Mirror of Delphine Diallo’s psyche, Golden Age is a meeting between the history of African spirituality and feminism, magnified by a kaleidoscope of references from her many travels to discover the mythologies of the world.