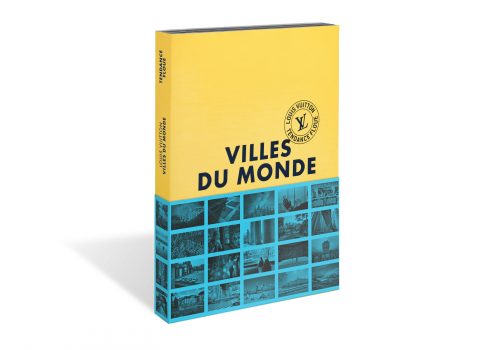 Synonymous with the art of travel since 1854, Louis Vuitton has just added a substantial and resplendent work to its library. Since 2013, its publishing house has invited the French photographic collective Tendance Floue to produce several opus of its “City Guide” collection. Paris, Sidney, Bankgok, Cape Town, Istanbul and a myriad of other towns are gathered in a wide invitation to travel, soberly entitled Cities On Earth.

The work undoubtedly was titanic. Conceived by Éditions Louis Vuitton, Tendance Floue and two graphic design studios (ABM Studio and Lords of Design), it brings together about 30 cities around the world, 8 years of works by 14 photographers, and as many days passed going thru crowds, sliding through sticky atmospheres, and living at night.  Nine mostly black and white chapters give the rhythm of the work, following the principles set up when it was founded, back in 1991 at the Rencontres d’Arles – while giving a circumscribed but lively place to color. These parts are called after a single word and play with the ambivalence of a shared character of the cities portrayed (Power, Style, Limits) with a moment, a method shared by the photographers (Travelogue, Black, White, Colour).

The first idea of the book lays on merging fourteen singularly accented glazes into a single kaleidoscopic vision of our planet. The urban connects them, tracing its path without making it possible to identify the cities (except for their most famous monuments, or the fold of a garment). It’s nearly almost impossible to recognize a photographer too, unless you know his vocabulary by heart. The space looks distended, mischievously blurred in order to avoid “swelling the plethora of postcards” (Muriel Enjalran). Time, or most likely eras, are also almost unlikely to be spoted out, as pictures were taken during almost a decade (2013 -2020). By confusing the tracks, by mixing gestures, what does the book say?

In spite of its imposing character, the book is penetrated by a principle of modesty. It is based on one of the active principles of Tendance Floue. From its foundation, the collective has valued its action in the form of an abstract entity, that of a single actor, a single “author”, ”a sum of individuals”, ”an alchemy”. To read and return to this book allows to understand the process of anonymization which defines their photography. This pooling of glances has given another way of representing our world, our time, no longer under the unique prism of a glance, but by confronting visions. It has become a strong part of street photography history, a story well narrated in the only essay written by Muriel Enjalran* —, by acknowledging the narrative power of the collective rather than the lone artist’s signature. By restoring this collective momentum, Cities On Earth also places the emergence and affirmation of this common vision in a historical context.

By multiplying the ways in which we look at our planet through exhibitions (“Nationale Zéro“, Rencontres d’Arles, 2004) or notebooks (those of the “Azimut” collection), Tendance Floue show an insatiable appetite. Representing our planet has become the myth of Sysiphus. The increased production and distribution of images drowns out the possible understanding that we would like to have of our world. Tendance Floue thwarts this impasse with a simple method: confrontation, that juxtaposes, superimposes, interferes with the glances of its members without shattering them. The book forcefully affirms both the illustrative power of photography and its limits.

Cities On Earth is a feat of prowess. While confusing cities and photographers may be simple, sometimes simple springs are enough to weave a story. The important thing is style, and Tendance Floue proves that cities have a different heart, a soul of their own, accents that, once superimposed, do not fade away. It is now commonplace to think that cities tend to become more uniform, that cafés are becoming bland everywhere, that lifestyles are becoming more uniform. Cities are often pointed at as the normalized space, becoming bland, sad, repetitive. Louis Vuitton Editions’ invitation to Tendance Floue is answered by the use of pictures. By constructing the book as a kaleidoscope, a thousand mirrors seems to open, in which shine many cities.