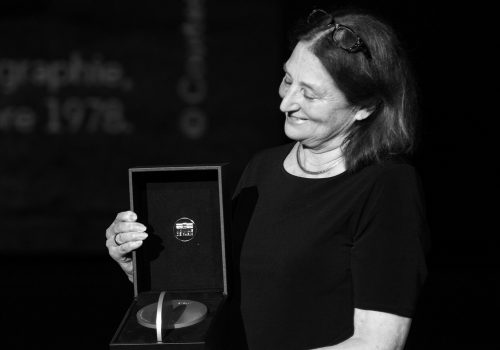 On July 2, 2019, at the 50th edition of the Rencontres de la Photographie d’Arles, Kering and the Rencontres gave the 2019 Women In Motion Award to photographer Susan Meiselas.

Over the course of the evening at the Arles Théâtre Antique, she talked to an audience of more than 2,000 people about her career, her commitments to different causes, and the representation of women in her work.

Susan Meiselas opened the night discussing the work that left its mark on the history of photography, Carnival Strippers (1976), which is currently being shown alongside works by Abigail Heyman and Eve Arnold for the Unretouched Women exhibition at the Espace Van Gogh in Arles : “This was the time of the debates, the feminist debates: whether or not a woman should use her body to attract men, whether or not sex workers were more “liberated”, because by necessity, they acted with their bodies… The women were transient: coming, going. And thinking about how to build relationships, as soon as I got to know them better, I felt their voices had to come from them to complement my pictures.”

Having recounted her years of war reporting in Nicaragua and Kurdistan, she went on to recount the Archives of Abuse project, which dealt with the lives of women who were victims of domestic violence in San Francisco. “So I was following the police, going to hotels at various sites, documenting the wounds. I sat with the police, I watched the folders of reports grow on their desks, and I began to realise, they were making those evidential photographs I wanted to make. They had already made them, and they were collecting the testimony. Every folder opened up another story. So we ended up doing collages together and they were part of a public awareness campaign about domestic violence and the first crisis line in San Francisco at that time.”

Susan Meiselas then shared her experience of organizing photography and drawing workshops at a shelter for battered women in the north of England, where she had long discussions with these women. She took pictures of the victims’ rooms for her project A Room of Their Own : “So a lot of the women told different kinds of stories, not always about what had brought them to the shelter, sometimes more about their determination to move on, to shape their new lives, and I would see these rooms and think of these rooms as mirrors, as kind of portraits, they were very clinical, institutional spaces, that they tried to make their own. And in some ways, when you look at the emptiness, you could reflect that they didn’t own very much, or you can think the opposite of what we just saw: that they didn’t want to stay there too long. And the terms of course were that I couldn’t reveal the place. And in order to also protect the women, that they couldn’t be present.”

The awardee concluded on her last project, Eyes Wide Open: “So, Eyes Wide Open – which is incredibly hard. Because it’s not just your eyes, it’s your heart. And you know I think about, can you keep staying open to look and listen? Make visible what is either hidden or forbidden? I don’t know. I guess I think of myself as a woman in motion in the sense that I am hopefully on an ongoing journey and I want to thank everyone who has been part of that. There are some old friends in the audience. You need friends, in life, as you go on. So, thank you all.”

Susan Meiselas is renowned for her work on human rights in Latin America, and her photographs feature in both American and international collections. In 1992, she received the MacArthur Award and was awarded, in 2015, a Guggenheim Fellowship. She was also presented with the 2019 Deutsche Börse Photography Foundation Prize.

Mediations, an exhibition of her life’s work from the 1970s to today, was recently presented at the Fundació Antoni Tàpies in Barcelona, the Jeu de Paume in Paris, and the San Francisco Museum of Modern Art.

About Women In Motion

A major priority for the Group, Kering’s commitment to women extends into the world of arts and culture through the Women In Motion program. For although creativity is one of the most powerful forces for change, gender inequality in this area remains flagrant.

Kering, a partner of the Cannes Film Festival, launched Women In Motion in 2015 to shine a light on women’s contribution to cinema, both in front of and behind the camera. Since then, the program has been expanded to include the worlds of photography, art and literature. Through its awards, Women In Motion recognizes both inspirational figures and talented young women, while its Talks provide an opportunity for some of the leading names in cinema to share their views on women’s representation in their profession.

For the past five years, Women In Motion has been a platform for helping to change mindsets and to providing thought leadership on both the role and the recognition given to women in all areas of the arts.

A global Luxury group, Kering manages the development of a series of renowned Houses in Fashion, Leather Goods, Jewelry and Watches: Gucci, Saint Laurent, Bottega Veneta, Balenciaga, Alexander McQueen, Brioni, Boucheron, Pomellato, Dodo, Qeelin, Ulysse Nardin, Girard-Perregaux, as well as Kering Eyewear. By placing creativity at the heart of its strategy, Kering enables its Houses to set new limits in terms of their creative expression while crafting tomorrow’s Luxury in a sustainable and responsible way. We capture these beliefs in our signature: “Empowering Imagination”.