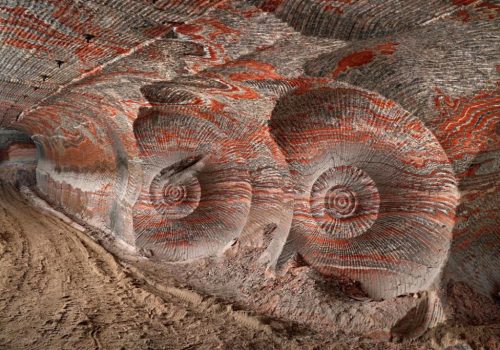 An investigation of human influence on the state of the Earth is profiled through the photographs by Edward Burtynsky, the films by Jennifer Baichwal and Nicholas de Pencier and augmented reality installations. That’s the multidisciplinary Anthropocene exhibition, at its European debut at Fondazione MAST, Manifattura di Arti, Sperimentazione e Tecnologia, in Bologna, opening on May 16.

Anthropocene is the completion of a four-year-long collaboration by the three artists and filmmakers. Their rigorously researched project calls for awareness of how the planet has been irrevocably transformed by human activity. Through innovative imagery, Anthropocene keep its focus on capturing the massive extent of human effects on land, sky, and water.

The project follows the research of an international group of scientists, the Anthropocene Working Group, and takes into account that nothing like this has ever happened before in Earth’s history: humans are changing the face of the planet more than all other natural forces combined as for cimate change, extinctions, technofossils, redirection of water. The indelible human footprint is evident in the concrete seawalls in China (covering 60% of the mainland coast), in the psychedelic potash mines in Russia’s Ural Mountains, in the devastated Great Barrier Reef in Australia or even in the marble quarries in Carrara.

This is why the Group is investigating whether we may have left the Holocene and entered a new geological epoch: the Anthropocene (from the Greek, anthropos, man), in which humans are the primary cause of permanent planetary changes.

“Burtynsky documents these entwined proliferating interventions into nature by the sheer power of his images and his focus on symmetries, circles, grids, and geometric lines. His large-scale images, together with the filmic input of Jennifer Baichwal and Nicholas de Pencier present us with an (impressive, ndr) visual array”, the co-curator Urs Stahel explains.

Next to 35 photographs by Burtynsky, four large-scale high resolution murals allow to examine the scale of humanity’s complex incursions on the Earth. The murals are enhanced with film extensions by Jennifer Baichwal and Nicholas de Pencier, exploring detailed scenes within the wider view. Visitors can access them through a free app (free pre-loaded tablets will be also available at MAST). Central to the exhibition are three augmented reality installations, made up of thousands of still images and assembled through photogrammetry, offering visitors an immersive experience thanks to near-to-scale, photo-realistic 3D images.

An integral part of the MAST exhibition is the award-winning documentary film Anthropocene: The Human Epoch, co-directed by the three artists and launched in Canada in September 2018. Third of a trilogy that includes Manufactured Landscapes (2009) and Watermark (2013), it’s narrated by Alicia Vikander.Interactive educational itineraries, with activities for children and students and MAST Dialogues on Anthropocene, plus cultural events, readings and round tables are scheduled as well (i.e. on May 16,17,18)

In the Anthropocene exhibition, the still image is countered by the movement of filmic components, providing viewers with different experiences of the subject. Burtynsky presents disturbing subject matter in a visually alluring manner to capture the viewer’s attention and encourage thoughtfulness. “In many of Burtynsky’s works a lack of horizon accentuates the image’s two-dimensional formal qualities, transfiguring geographical elements into visual puzzles” co-curator Andrea Kunard says. Indeed “the landscapes in his photographs often look like rolled-out sheets of reptile skins onto which human usage has been stamped. We humans seem to plow over the skin of the earth, tattooing it and gradually, at times even explosively, throwing it off-kilter”, Urs Stahel adds.

The exhibition is co-curated by Urs Stahel, MAST PhotoGallery curator, Sophie Hackett, photography curator at the Art Gallery of Ontario in Toronto and Andrea Kunard, curator of the Canadian Photography Institute of the National Gallery of Canada in Ottawa. And is organized by these very same institutions.