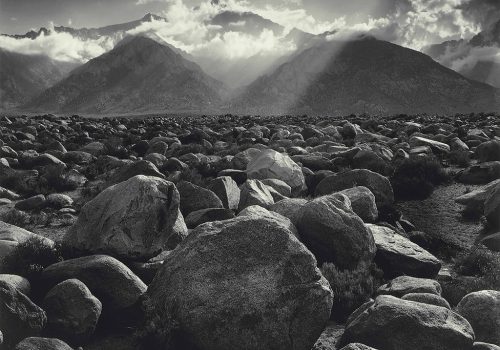 Atlas Gallery presents Ansel Adams: Landscapes of the American West, an exhibition of works by the celebrated landscape photographer and environmental activist. This is the first time for ten years that a significant body of Adams work is exhibited in a London gallery.

Landscapes of the American West demonstrates Adams’s technical mastery and innate sensitivity to nature. It includes some of Adams’s most dramatic and recognisable images for example, the haunting Moonrise, Hernandez, New Mexico, 1941 in which a solitary moon hovers over wraithlike clouds blanketing a valley near Española in Santa Fe.

Adams grew up in San Francisco amid the sand dunes beyond the Golden Gate and fell in love with the landscape around him from an early age. His early years, ‘coloured and modulated by the great earth gesture of the Yosemite Sierra’ kept him returning to explore and photograph the valley throughout his life. Adam’s connection to Yosemite led him to join environmental organisation, the Sierra Club which in turn led him to lobby for the foundation of King’s Canyon National Park in Sierra Nevada years later.

His familiarity with theCalifornian landscape enabled him to capture the untouched beauty of the region. Mount Williamson, Sierra Nevada, from Manzanar, California, 1944 is an example of this.‘The eye and mind gather the splendours of this region into wonderful ideas and anticipatory visualisations.’ Taken whilst a storm raged in the mountains, Adams was able to use the conditions of a usually dry and grey landscape to accentuate ‘shapes and planes hitherto unseen’.

Adams’s gainedmore control over a finished photograph by using his Zone system, a method that translates tonal variations into different shades of grey in black and white photographs on negatives and paper. His concept of ‘Visualisation’ was also a fundamental part of his original aesthetic – seeing the entire image in its spiritual, emotional and intellectual aspects – before shooting.

During his lifeAdamsworked for Kodak, Polaroid and Hasselblad advising them on improvements to camera technology. Producing many photo diaries, portfolios and volumes on photography include Making a Photograph (1935) and the 1940s and 1950s Morgan & Morgan Basic Photo Series (The Camera, The Negative, The Print, Natural Light Photography, and Artificial Light Photography) he remains the most sought out teacher of photography today.