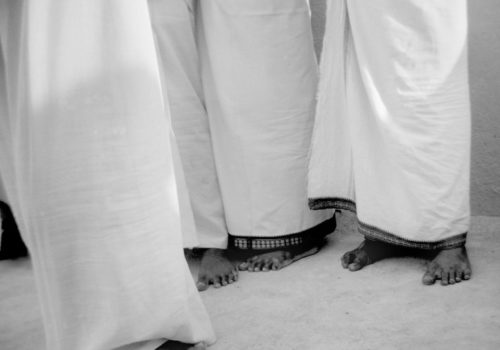 Until December 26, the New York SepiaEYE gallery is featuring a retrospective of the Indian photographer Annu Palakunnathu Matthew. Assembling eight projects which retrace her twenty-year-long career, this exhibition is a window onto the memories of an artist who uses photography to examines her identity and origins in the mirror of exile and uprootedness.

Born in 1964 in Great Britain to Indian parents, Annu Palakunnathu Matthew grew up in India and, in 1992, settled in the United States. Taking her personal story as a point of departure, she pulls us into a world of memories, interweaving reality with fiction, family history with the history of American Indians and Indians from India and Pakistan, or yet more or less distant past with the present.

Reconstructing her childhood and origins

In Fabricated Memories, Annu Palakunnathu Matthew recreates her childhood using old family Polaroids and snapshots taken thirty years later on the occasion of a visit to the place where she grew up in Great Britain. The resulting images show the artist with her father who died when she was twelve years old. Printed on fine, fragile paper, these pastel-colored photographs with irregular contours give a concrete shape to memories that seem to have alighted gently on the surface. Stained with tobacco—a substance which had killed her father—Matthew’s images stimulate the viewers’ senses drawing them even deeper into the photographer’s memories.

In An Indian from India, Matthew proposes a series of diptychs, which pair vintage photographs of Native Americans with self-portraits in traditional Indian costume, adopting among others the codes of anthropometric photography used by the English in India in the 19th century. Where is she from? Who are her ancestors? Indians from India or American Indians? Once again, the artist muddies the waters about her origins and, by extension, her identity.

A portrait and voices of exile

Lastly, in Open Wound, Annu Palakunnathu Matthew returned to the partition of India and Pakistan, which has left many families with long-lasting scars. In the course of three months, in 1947, twelve million people were displaced and over a million killed in clashes between Hindus and Muslims. The short photo animations, which make up this piece, present a succession of older or more recent portraits, tracing a collective image of the tragedy. The artist relies on vernacular and family photographs to address a major issue in the history of the Indian subcontinent. Using individual memories and testimonies of thousands of Indians, she paints a portrait of a generation that continues to live with the pain of separation.

With great sensitivity and subtlety, Anu Palakunnathu Matthew’s work builds on the universal themes of identity, exile, and uprooting. Starting with a family photograph, whether her own or someone else’s, she explores collective memory and its transformations with intelligence and emotion which truly set her apart as an artist.