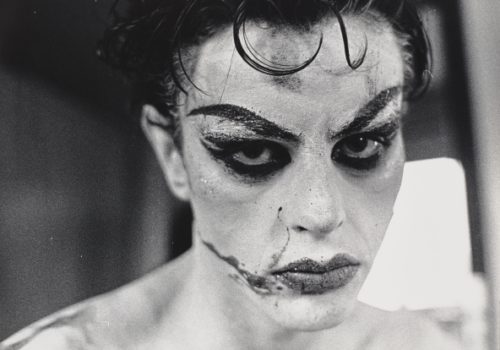 The  Collection Regard presents the photo exhibition “Anno Wilms – Identity and Contrast”, curated by Marc Barbey.

The main interest of the Berlin photographer Anno Wilms (1935-2016) was the human being in his individual self-imposed as well as externally-determined living conditions. The topic of social minorities takes an early and central position in her work. In the ’60s and’ 70s, the ever-restless traveler photographed Roma families across Europe, was seeking Bedouin camps in Israel and Egypt, and later lived with the Rastafarians in Jamaica for weeks. Another fascinating focus in her large and well published oeuvre is the performing arts and above all the dazzling world of the Berlin transvestite scene as it was acted out in the famous cabaret theaters Chez Romy Haag and Lützower Lampe. Photographs of The Lindsay Kemp Company furthermore take notice of a theater group that, beyond all classical theater concepts, has created a new, exalted and frivolous world of expression.

Anno Wilms always knows how to create an ease atmosphere of respect and how to capture it masterfully. She approaches her counterpart without personal reservation and with great respect for his specific circumstances of living. This also explains the open access to the private sphere, which the photographer has repeatedly been granted. Her sensitive portraits testify her proximity to the motif and reflect strength and curiosity of children, self-confidence and spiritual conviction of adults as well as authority and dignity of the ancients, who are responsible for the memory of tradition and history. But existential poverty and the cultural endangerment of social minorities also become evident. Anno Wilms was constantly seeking to enlarge our understanding of identity, be it of cultural, religious or gender nature. She examines the fragile balance of self-assertion between private life and stage, between one’s own self and the other, between reality and vision.

Anno Wilm’s choice of subject made her quite an exotic member within the circle of her colleagues. She developed her own photographic language in a very singular way. Her prints are deliberately strong-contrasted and exceptional in their high-gloss texture. The result is a rather cold, crystal-refined effect in which the photographer consciously breaks the proximity to the motive and the intimacy of the captured moment. These means of expression support the focus on topics outside the mainstream and define a signature by themselves. Her experimental work with solarization and photo-chemical painting also confirm Anno Wilm’s interest in finding her own way beyond the usual path.

After studying at the Photography School in Hamburg Anno Wilms received a state degree at the Lette Verein in Berlin. She worked as a freelance photojournalist throughout Europe, Middle-East and US from the early 1960s, focusing on social minorities and in the performing arts. In the search for a comprehensive understanding of identity in the field of tension between reality and vision, her main interest was the human being in his individual self-imposed as well as externally-determined living conditions.

Anno Wilms lived and worked in Berlin. The artistic estate of the photographer, which includes about 40,000 prints and more than 6,000 negative films, was transferred to a foundation during her lifetime. It is the foundations mission to preserve the extensive photographic work and make it accessible to the public. The Anno Wilms Foundation is located in the former living quarters of the artist on Xantener Straße in Berlin-Charlottenburg.

This exhibition takes place in collaboration with the Foundation Anno Wilms.

A catalog of the Collection Regard with a text by Klaus Honnef will be published on the occasion of the exhibition.