Anna Fox and Karen Knorr – Another Way of Telling 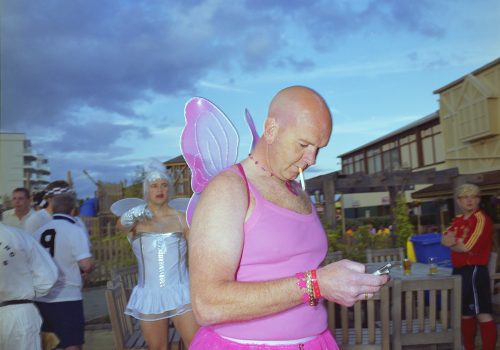 Another Way of Telling: Photographs by Anna Fox and Karen Knorr showcases almost 100 works from the rich, dynamic careers of two of Britain’s leading documentary photographers. Here, acerbic wit is brought to sharp social commentary on subjects that are seen through two highly individual perspectives that wrap the photographers’ penetrating insight into the issues of our times in a warm dose of humor. The exhibition includes selections from representative themes in each of their work, as well entire series which function like photo essays exploring topics like class, working environments, and self-awareness. Here we have Anna Fox’s Work Stations, and Basingstoke, in contrast with Karen Knorr’s Belgravia about the gulf in class attitudes, and Punks which documented the first generation of the punk music movement in the UK in the mid-1970s.

In her recent work, Karen Knorr constructs scenes from the real and virtual worlds to produce her Fables and India Song. Anna Fox explores stereotypes that have become entrenched in lifestyle magazines, that begin and end with contemporary aspirations. As described by British photo critic Sean O’Hagan, her ‘subject matter is the ordinary and the everyday,’ but what makes the resulting images striking is how she ‘approaches it with an artist’s eye for the absurd and the revealing.’ Through all these works we can see the photographers’ thinking about culture, gender, environment, and nature.

There has been a volume of activity in the field of documentary photography in Britain since the late 1970s, which both builds upon and stands as a reaction to the documentary tradition. Photography played an incisive part in constructing a British documentary movement from the mid twentieth-century, that began in literature and soon extended to film and in time to television. The spirit of questioning and re-invention that characterized the particular period of New or Expanded Documentary that emerged from the 1980s, was new in that it began to draw on strategies from contemporary art, primarily in its questioning and play with notions of authenticity and truth. That play, in terms of the mix of carefully observed reality and consciously constructed illusions, is embodied in the work of Anna Fox and Karen Knorr, described here as ‘another way of telling’.

Another Way of Telling: Photographs by Anna Fox & Karen Knorr