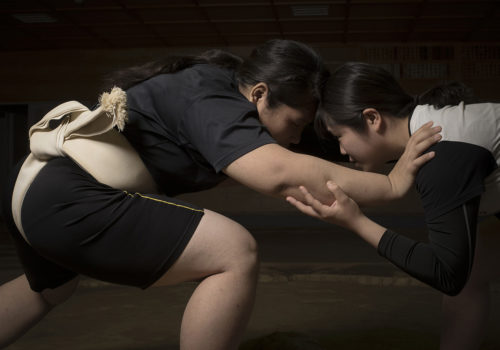 The ancient practice of Japanese sumo dates back to the prehistoric era, yet professional sumo remains exclusive to men. Women are prohibited from even stepping foot in the dohyō, the sacred ring where sumotori wrestle. Despite this, female sumo wrestlers do exist even if not yet acknowledged by the ranks of the professional sumo.

Women sumo, or joshi-sumo in Japanese, is a fairly recent amateur sport that has been around for only a handful of decades. The International Sumo Federation, the main organization supporting joshi-sumo, was founded in 1992, while the first major women sumo championships date back to the mid 1990s. There are women sumo teams in Japan as well as in countries such as Mongolia, Russia, and Germany; and international competitions are now held annually. Sumo wrestling has never been featured at the Olympics, although the Tokyo based International Sumo Federation aims to have it included one day.

Sumo wrestling is believed to have originated in Japan as an agricultural ritual to Shinto deities. Centuries later, the national sport of Japan is still governed by ancient traditions, rituals and stringent regulations such as weight and height requirements and nine years of compulsory education under the instruction of oyakata (former wrestlers). The women ban is also rooted in Shinto beliefs; according to Shinto tradition women are impure because they menstruate and would therefore contaminate the dohyō by even touching it.

Joshi-sumo are therefore restricted to amateur clubs within schools and universities such as the Asahi University Sumo Club. In 2018, Liverani visited the club which at the time had nine female members, making it the largest joshi-sumo team in Japan. Training is unisex and the mixed team trains for more than two hours together on weekdays. After the stretching and general exercise routine, the girls wrestle against each other and against the boys. Size does not matter you don’t have to be extra-large to become a sumotori. Both during practice and competitions, women wear the mawashi (sumo loin-cloth belt) over t-shirt and shorts, or over a leotard, as opposed to naked skin. Training takes place in the dohyō, that is swept and sprinkled with sand and water regularly.

Laura Liverani is a documentary photographer and university lecturer based between Tokyo and Italy. She holds an MA in Arts and Media at the University of Bologna and in Photographic Studies at the University of Westminster, London. Laura works internationally on independent projects and a variety of commissions, ranging from editorial to commercial assignments. Her work is featured in magazines, books, catalogues and exhibitions worldwide.

ABOUT ANASTASIA PHOTO AND AG GLOBAL

Anastasia Photo is a New York City gallery that specializes in documentary photography and photojournalism exhibitions that are accessible to public institutions, art galleries and museums.

AG Global Creative Agency produces public and private arts programming creating meaningful cross-cultural exchanges between the United States and Asia Pacific nations. Through its unique art and event offerings AG Global has worked with a wide range of corporate clients, helping them to communicate their brand values to new and diverse audiences.