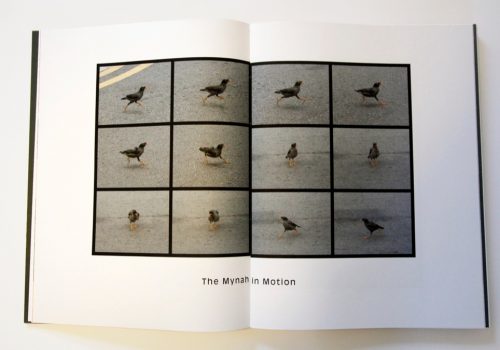 The Migrant tells the turbulent story of a Mynah (Java martin / Acridotheres javanicus), a bird close to the mainate who is now the number one public enemy … Originally from Java (Indonesia), it was introduced to Singapore at the beginning of the twentieth century, a golden age of songbird trade. Today, considered an invader, he is insulted, persecuted and even killed. Through this story of a bird, Anaïs Lopez tackles broader themes – the complexity of the relationship between man and animals, the consequences of rapid urbanization and especially the position of the unwanted stranger.

A documentary photographer, Anaïs first met Martin in Singapore five years ago. Tired after a long flight, she just wanted to sleep. A few minutes after falling asleep, she is awakened by a noise. A little bird was banging on her window and croaking. Unable to sleep, she went for a walk in the city. The little black bird with long yellow legs and an intelligent look in his eyes was waiting for her. Curious, she followed him for five hours all around Singapore until she lost sight of him.

Back at the hotel, she openned a newspaper on the table and came across an article entitled “There’s a new terrorist in town! Featuring this same little bird! Singapore was trying to get rid of the martins using all kinds of methods: poisoned foods, poison gas, shootings and even hawks. Fascinated, she grabs her laptop and begins to investigate this bird and discovers that he sings with a beautiful voice. How did he come to push this unpleasant croaking? She sees a story to tell.

She began her investigation at the National Library. The rough croaking did not occur until, becoming independent in 1965, Singapore, sleeping city with rubber plantations, became a bustling metropolis. Integrating the ambient noise, the birds added a heckling that people could not stand. A war against the bird had begun. She continues to this day. During her investigation, a man who exterminates these birds told her, “These birds are all that Singapore is not. They are not welcome here. They are noisy, unruly, dirty and messy.

The Migrant tells this story through photographs and serigraphs as well as a comic strip. The book ends with a hand-made pop-up. A small book, in English, tells the story of the martin in the style of a tale.