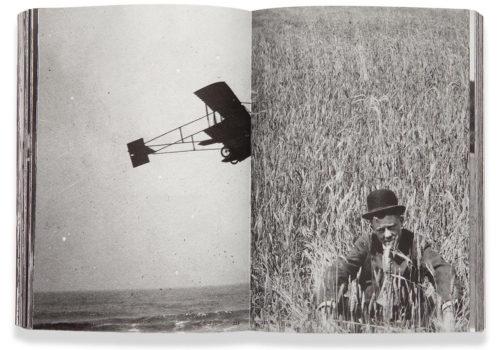 Published by Morel Books and AMC, this new book with its dark blacks and luminous whites draws the reader into a category of images that has largely escaped the notice of historians.

As we turn the pages, we are regaled with a corpus of several hundred Real Photograph Postcards (RPPCs). These original silver prints are a hybrid between a photo and a postcard. They were printed directly onto paper, marketed in particular by Kodak, with a space on the back for an address, a stamp and a few words.

RPPCs were a medium for correspondence intended to be sent by post. You could use them to share a picture of yourself or your home with your family and friends, much as people do today, albeit instantaneously now, through the social networks.

People dig the earth, work the land, cultivate and exploit it. Minerals are extracted, fruit is picked and vegetables are harvested. Mines, sawmills, bars, fields are the subjects, and of course the house with its porch, its rocking chair, its walls covered in photos, and its bookcase, the fences surrounding the house and also the windows looking outwards.

This book of images takes us into the vagaries of ordinary life in the villages and countryside of North America at the beginning of the 20th century. The title, “Dry Hole”, is taken from one of the postcards. It conjures up the harshness and adversity of difficult situations like arid land or a dried-up well.

Interspersed with the photo cards are reproductions of the messages on the back. The shaky handwriting reflects the hesitations of hands less accustomed to writing than to working the land or building a house. The messages are as mundane as they are moving, like the few words written in haste by a father longing to get back to his children but not knowing when he will be able to. Words sometimes appear in the images themselves (slogans, restaurant blackboards, or signposts, for example) or have been written on them (the name of a place, a date, or a comment). The juxtapositions sometimes throw up surprises, giving added meaning or creating confusion, like in a game of consequences.

Real photo postcards were produced by local or itinerant photographers and sometimes sold commercially. Usually, though, they were made by amateurs, which means that they are often one-off images. Collected on the internet during the pandemic, this previously unpublished material has been reworked by the author of the book. Details have been scanned and augmented; the images have been resized and recomposed: “Juxtapositions have taken shape. Intuition reigned»,” writes David Thomson, who points out the extent to which his gaze was guided by nuances of light which sometimes enhance and sometimes diminish, to the point of causing forms and faces to disappear. Faces which give vibrancy to the images, and express, over the course of the book, “a range of emotions” from apprehension to joy – expressions of fear, sadness, surprise but, above all, courage. “A sense of bewilderment was coupled by wonderment; the nature of people and their ways of being. Timeless moments…”.  About the Author : David Thomson is a Canadian collector with a passion for art and photography. Dry Hole is a follow-up to his book “82”. Both books are based on collections of vernacular images. Those in “82” are from World War II soldiers’ photo albums and, in “Dry Hole”, they are amateur photo postcards. Both Thomson’s books focus attention on the messages on the back of the photos, on what is not immediately visible. A whole range of emotions and sensations are revealed by the cumulative effect of the images and the way they have been cropped.

Dry Hole is available on the Morel Books website:
https://morelbooks.com/products/dry-hole

or on the Archive of Modern Conflict website
https://archiveofmodernconflict.com/dry-hole-david-thomson/

and from any good bookshop.